Elis and I, accompanied by Chris Lamsdell one of Wader Quest's Trustees, attended the OSME Summer meeting today. We were treated to some excellent talks, not least among them from another Wader Quest Trustee and all round good guy, David Lindo, The Urban Birder who, with his assistant Louise Moss, also had a stall next to ours.

The organisers allowed me to have a short time to talk to the assembled members of the society about Wader Quest, for which we were extremely grateful.


The first talk was by Nick Moran about the Eurasian Cuckoo tagging project which has revealed some fascinating facts about these birds' migration to and from Africa each year. 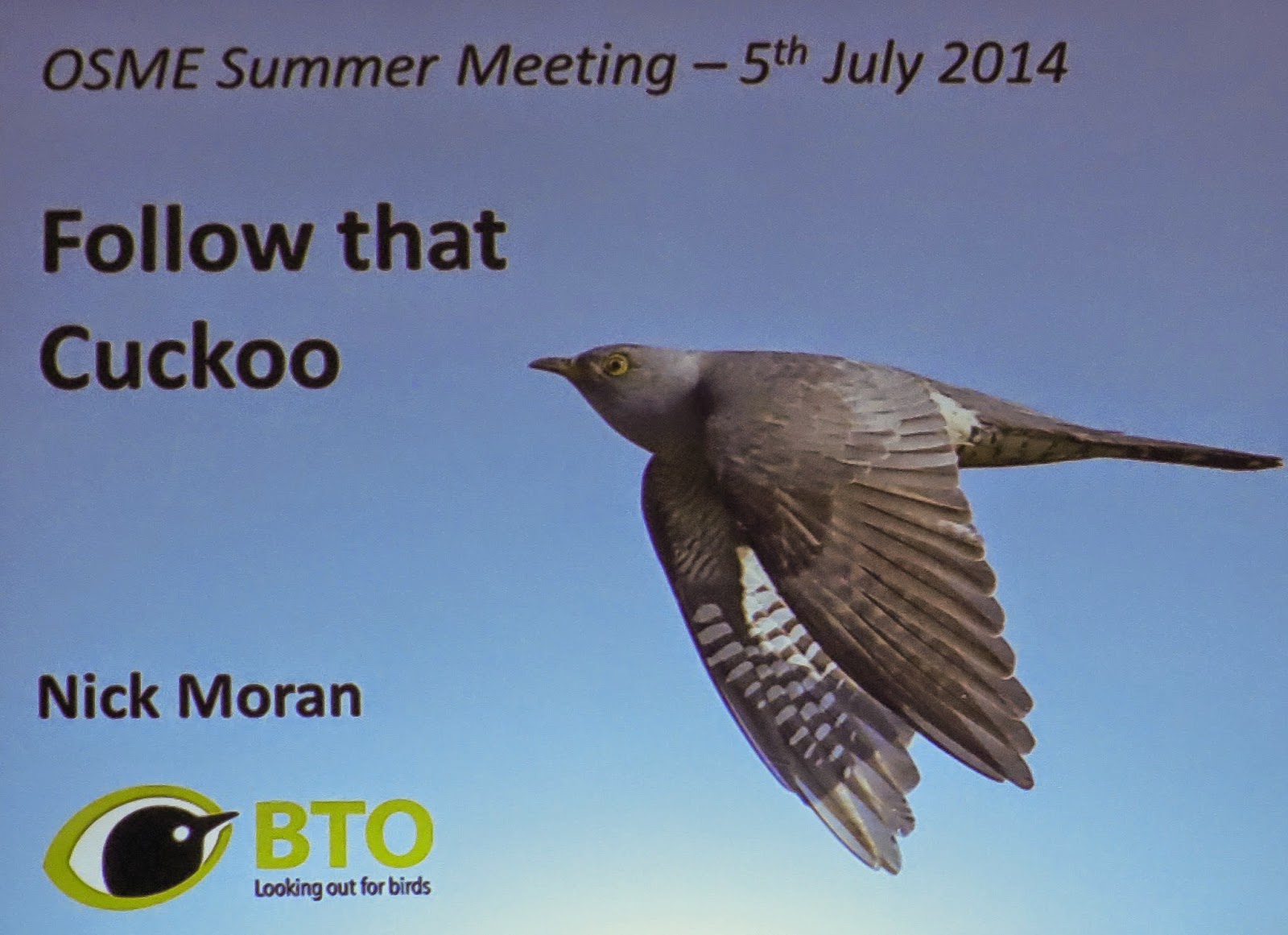 This was followed by Rob Sheldon, Chairman of OSME, talking about the conservation grants that OSME has made and hopefully will make in the future, they have already passed on an impressive amount of money for projects, and hope to increase the rate in the future!

It was then the turn of Johannes Kamp who spoke about Black Larks in Kazakhstan including the slightly unsavoury habit they have of surrounding their nest site with dung, and possible explanations as to why. 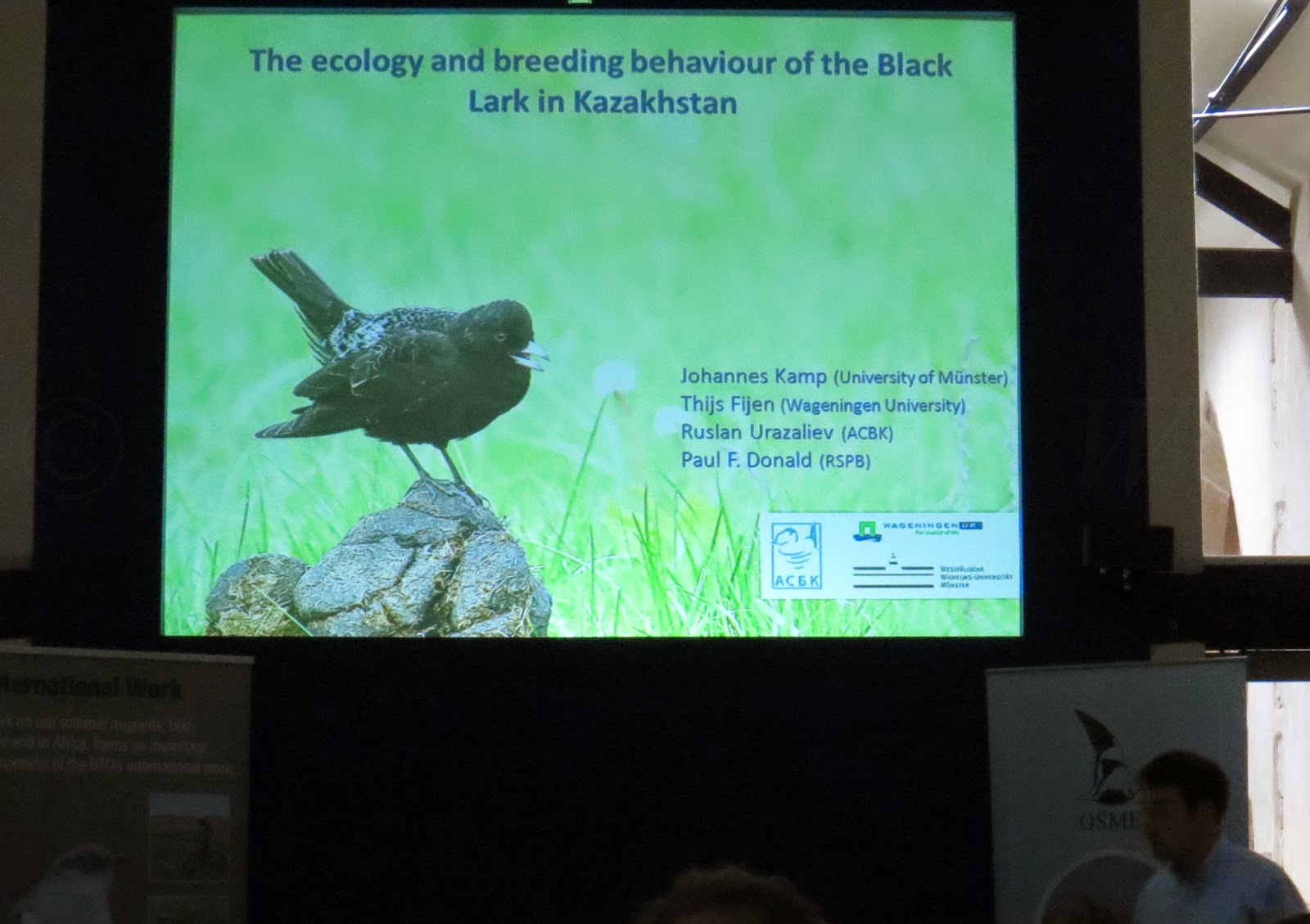 It was then lunch time and we had the chance to speak to people and answer questions about Wader Quest at our stand, then came the AGM followed by a presentation by Sal Cooke about how Sandgrouse, the OSME magazine. will be available on-line.


It was then yours truly... 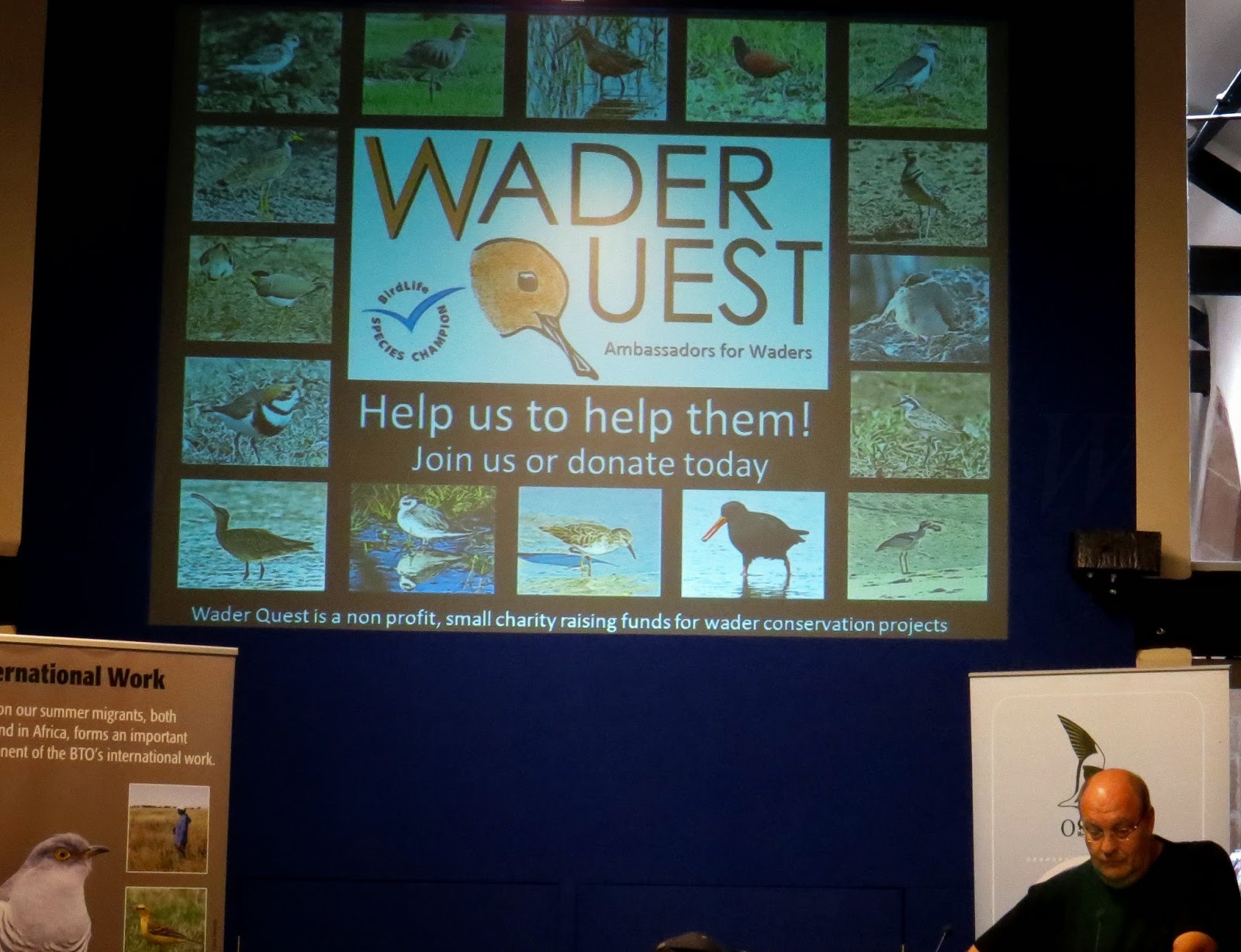 and then David Lindo who talked about his team's laid back approach to participating in the Champions of the Flyway bird race in Israel. 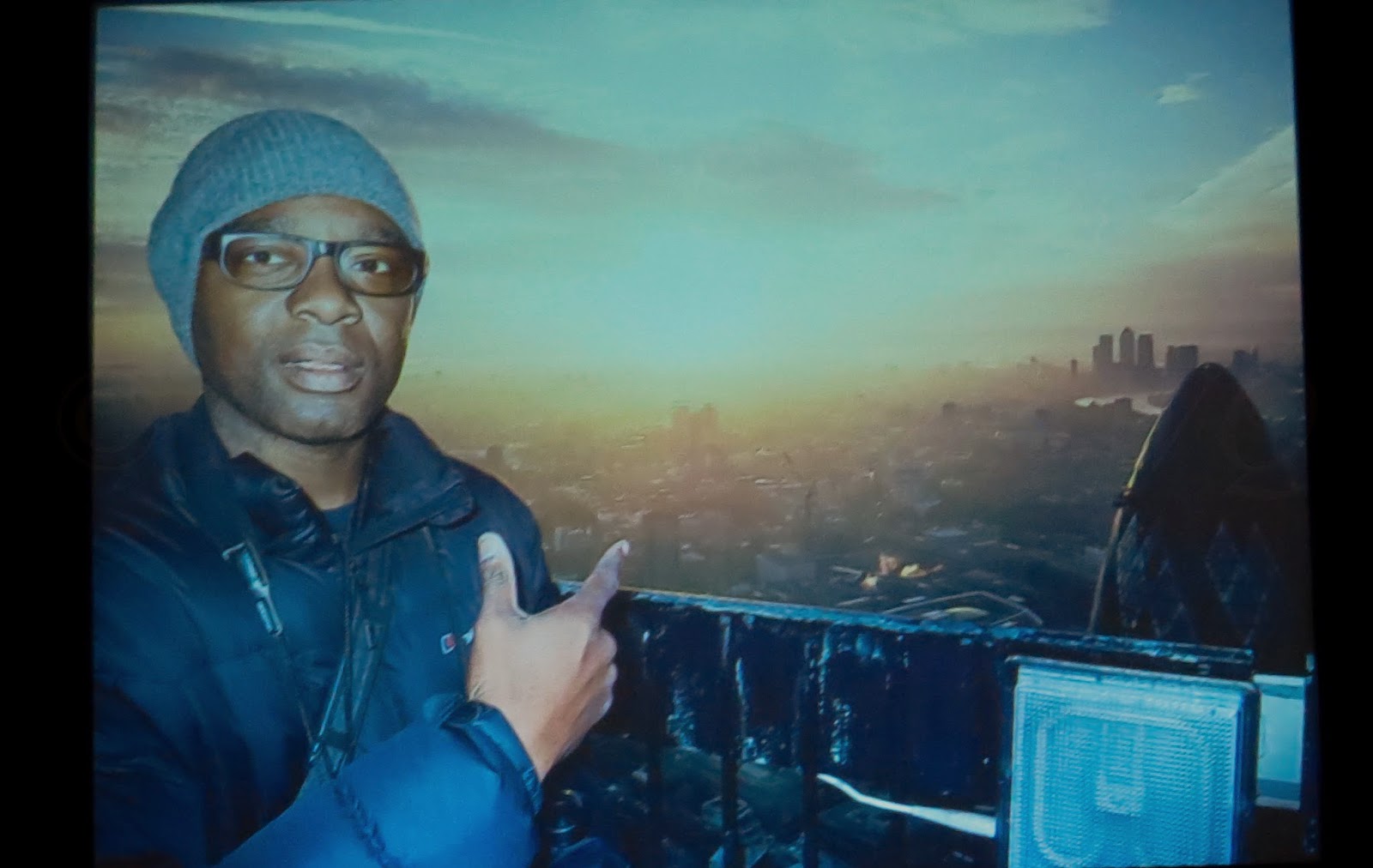 Nabegh Ghazal Asswad is from Syria and he told us that despite everything that is happening in Syria right now, the conservation and research work has been continuing and even said that in certain places wildlife has benefited from the situation due to people being restricted as to where they can safely go to hunt and fish.


Tajikistan looks like a fascinating and beautiful place and one day we'd love to visit. Rafael Ayé gave a synopsis of the country, its people and some of its birds. 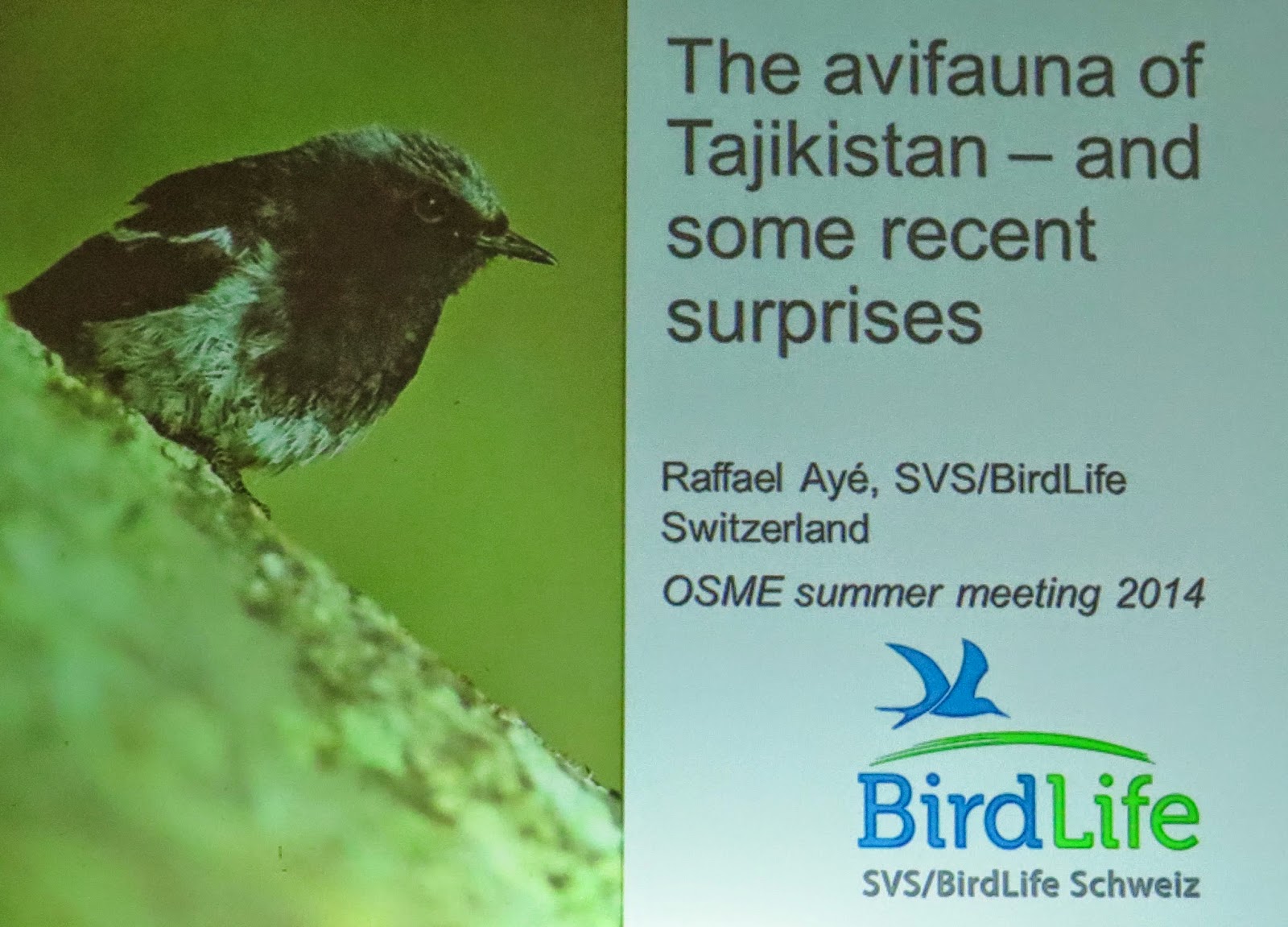 Reviving Waterbird Counts in the OSME region was presented by Szabolcs Nagy about how the OSME region is not well represented in these surveys. On the map of the world showing the sites covered, we noted the ones that corresponded to the surveys we had carried out in Brazil with some pride. Wader Quest Brasil also has a connection with this in that the national co-ordinator in Brazil just happens to be Gislaine Disconzi who runs the WQ Brasil facebook page.


The raffle was then held and to our surprise we actually won something, a bottle of sparkling white wine from Italy. Looks delicious, can't wait to try it, we just need an excuse now...

We also enjoyed meeting Dawn Balmer of the BTO who was busy making sure the event went well and we should also thank Rob Sheldon and Helen Demopoulos who kindly arranged for us to attend and speak at the meeting.

We have joined OSME and made a small donation on top to say thanks for the hospitable reception we received from the society and its members.

Posted by Rick Simpson Birding at 16:24