Back in September of last year 2017 Steve Cale very kindly donated a magnificent oil painting of two Dunlins and two Ruddy Turnstones on a rock by a pool to Wader Quest. He suggested we raffle the artwork and so that is what we did.

It had it's inaugural outing at the Iolo Williams talk at the Wirral Wader Festival and it's final outing was a week or so ago when we visited Essex to give a talk to the St Lawrence Wildlife and Photography Group. In between times it has travelled far and wide with us to talks across the country.

During that time we have collected an amazing £604!!
So thank you to everyone who bought a ticket.

To keep things in order we asked a friend Sandra Herman, who is a local magistrate and independent of Wader Quest, to draw the winning ticket. 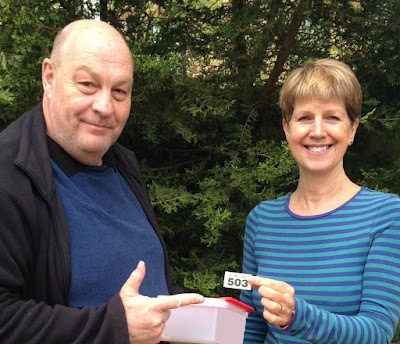 The lucky holder of which was a gentleman by the name of Pravin Chotai.
Pravin bought his ticket at a Wader Quest talk given by Rick and Elis at the Reading RSPB local group in Pangbourne earlier this year. This week they journeyed down to Reading to present Pravin with his prize with which he was obviously delighted.


Thank you once again to Steve Cale for this very very kind donation and to all of you who took part so generously.
Posted by Rick Simpson Birding at 09:48