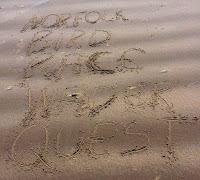 The day didn't get off to an auspicious start. Elis' new shoes, which we purchased especially for the race, were removed from the box and turned out to comprise two left feet ('a bit like Rick's dancing' she postulated at the time). Bird-wise the guaranteed Tawny Owl and Little Owl sites near to the start point in Heathersett drew blanks - despite the Tawny owl calling the night before and again after we had finished! Team Captain Dan Bradbury commented that a former bird racer had said to him. "My one bit of advice - don't rely on Tawny Owls!"


The team then drove, slightly miffed but still full of optimism for a bird-filled day of excitement, over to the Brecks. A brief stop to listen for Stone Curlews failed, although we were pleased to pick up our first waders; Eurasian Curlew and Northern Lapwing both calling beautifully.

Next stop RSPB Lakenheath. Some of the team it seems had not put in the requisite amount of preparation, both physically and mentally. (It would be rude to single anyone out and identify people individually so, mentioning no names, for now we'll call him Rick.) With certain people grumbling about distances to be walked (and that was just from the car park to the reserve visitor centre), the team set off around the track with young Oliver Simms scampering off in front.
Occasionally he'd look back and, noticing the rest of us were miles behind, he'd come bounding back, tongue lolling, like an energy fuelled spaniel puppy being exercised by a decidedly doddery and elderly owner; his frustration was palpable.

By the time we returned to the car, at least one member had been crippled by the yomp but the list was mounting and we had what we thought to be a couple of goodies under the belt; Short-eared Owl and Whinchat. We later discovered that the owl had done the unthinkable and performed for the other team that we had met at Lakenheath that morning and we also discovered that one team member, again not naming names, but for now we'll call him Oliver, hadn't quite got the competitive edge that it takes to win a bird race. He is the caring, sharing type and allowed this benevolence to spill over in his over informative tweets about what the team had seen, and WHERE!


You are beginning then, I hope, to get a picture of how this all went wrong for team Wader Quest although we all, it can only be hoped, had a spiffing day. The weather played a blinder bathing any bird we did manage to see in glorious sunlight showing it off to its maximum beauty. Team Captain 'Lieutenenat Dan' tried his best to chivvy us all along, but many birds that were encountered were missed by the incompetence, lack of concentration or diminutive stature, of one or other of the team. As the rules clearly stipulate that every team member has to see or hear every bird, we felt we were letting them slip away (as it happens we got them all back later), confidence started to dissolve like sweetex in a cup of tea (which would have been very welcome at any point in the day).


One disappointing episode was when we met someone who gave us precise directions for a singing Grasshopper Warbler and a Nightingale. Upon arriving at the 'Gropper' site there was a photographer there whose facial expression betrayed the fact that he was none too pleased to see us. When asked if the 'Gropper' had shown he assured us that the location for it was further along the path. On reflection later, and recalling the original instructions given to us, he was not, it is suspected, altogether truthful with us, not naming names... actually we have no idea who he was, so he's safe. We did get the Nightingale though by slowing the car down enough, as we left, to hear it sing as we drove by on our way back to tick off the Stone Curlews at Weeting. This brought us to having four wader species on the list with Common Redshank also being added at Lakenheath.

Next stop was a 'secret' location that is probably not all that secret but we don't want any misunderstandings with divulging locations for rare breeding birds do we? Dan said we would pop along a track for a 'five minute' stroll for the much prized Lesser Spotted Woodpecker. This was to be one of the highlights of the day. On the way down the track, which turned out to be a little further than Dan had remembered, we passed a rival team leaving the site. Awkward silence and mumbled niceties made up the conversation, but as we left a hint of chivalry emerged when team leader Ian Dearing nodded in the direction we were going, smiled and said "It's nice down there" an indication perhaps that we were not going to be disappointed? We were not. Oli and Dan arrived long before the already fading veteran and his patient wife, both of whom heard the drumming long before catching up with a smiling Dan and an exuberant Oli, who was bouncing around like Tigger. More signs that the 'secret' site isn't that secret at all were manifested in there being a number of birders there, none of whom were involved with the race.

Flitcham was where we were supposed to catch up with the Little Owl missed earlier, it wasn't to be, but we did get a Tree Sparrow, a most handsome bird in the sun, and Eurasian Oystercatcher there. As we ate some of the delicious sandwiches provided by Dan yet another team arrived, looking smug and playing their cards close to their chest, as is the way of such events (please note Oli). We left, while they went to the hide and photographed a Little Owl!

Next came the long march up the bank at Titchwell. Already broken, but cheered by the chances of seeing waders, team Wader Quest set off. Search as we might we couldn't find the promised Little Stint, but a Eurasian Whimbrel made up for it rather nicely along with Ruddy Turnstone, Red Knot, Sanderling, Pied Avocet, Little Ringed Plover, Black-tailed Godwit, Grey Plover and Dunlin bringing our wader total to fourteen.

From then on it was site hopping, thankfully with minimum walking requirements, adding the odd bird here and there. We were on 99 when we drove into the harbour at Wells. Oli shouted from the back with glee "Species number 100!" We had all been speculating as to what this might be as we were driving along; none of us though had hoped, or feared, it would be Feral Pigeon!

Lovely views of a Common Greenshank at Morston Quay were enjoyed taking the wader tally to fifteen.

We more or less ended the day at Cley. There were splendid Yellow Wagtails and a stunning Northern Wheatear at the beach car park.

We also took a look at Pat's pool where we added Common Sandpiper (wader number sixteen), watched two Black-tailed Godwits bashing seven bells out of each other and felt rather self-conscious about watching Common Redshanks making love.

A dash to another site got cancelled when we realised we'd have to walk miles in consideration of one team member's temporary lameness (at least I hope it's temporary) and then we had fun trying to find the finishing line (in common with a number of teams; maybe this was Andrew Whitelee's ruse to get us all disqualified by not turning up on time). We found the venue which was, not surprisingly, deserted; no-one else was likely to finish for several more hours yet.

It is often said, that 'it is not the winning but the participation that counts' and in this case that was certainly true. Many people had put themselves out, Andrew Whitelee and Ian Dearing in particular to make the bird race happen, and it was they that decided it would be for the benefit of Wader Quest, so we thank them very much for thinking of us. In addition the teams have raised some serious money on our behalf and we are delighted with the ever mounting total that has and is still being raised. We are of course also grateful to all those who made the donations, be it through participating team members or on the JustGiving site.

As we were the conservation charity that was to benefit from this year's event, with all the effort being made by others, it was only right and fitting that we should enter a team, entering into the spirit of things. We felt we should show willing and this we did. So a big thank you from Elis and me to Dan Bradbury and Oliver Simms for agreeing to join us, for all the hard work they put into planning the day. for turning up and putting up with us all day. We apologise for holding you back at times, but we had a great day out for sure and the camaraderie and sense of humour was maintained throughout. In addition we'd like to thank Dan for his generous hospitality and catering.

So, are we going to do it again next year? You work it out!

A huge thank you to all involved in this wonderful event; the organisers, the teams and the generous sponsors.

Posted by Rick Simpson Birding at 12:20