Recently we received a communication from Birdlife Australia reiterating exactly what we have been saying since we started Wader Quest and that is that wader conservation and the crisis facing waders or shorebirds is under-appreciated and under-recognised; what BirdLife Australia refer to as the Silent Shorebird Crisis.


We have been striving to place the destruction of the intertidal zones, and other essential wetland habitats, as much on the lips of birders (and the public at large) as that of the rainforests. In the introduction to the recent Wader Quest e-newsletter special for Wader Conservation World Watch I wrote referring to our humble beginnings and our preoccupation that...


... although the threats to waders had never been greater, awareness of those threats, even among birders, was not growing in proportion, in short, the crisis was unfolding almost unnoticed.


Whilst it is relatively easy to get people emotionally engaged when seeing magnificent, centuries-old trees being felled and huge tracts of forest turned to a smouldering pile, it is much harder to get people fired up by what is essentially mud.

Whilst the comments made by Birdlife Australia relate to that country, the same can be said of wader populations worldwide. The red line in the graph below shows the huge decline in Australian wader numbers overall. 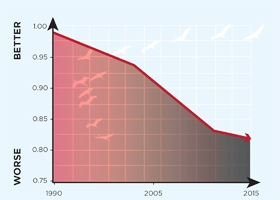 Mongolian Plover (Lesser Sandplover) numbers in Australia have fallen 84% across 49 sites in the last 24 years!

Both Eastern Curlew and Curlew Sandpiper have suffered losses of over 80% in Australia too placing both species on a national list of Critically Endangered birds.

Birdlife Australia also underline another of our major concerns, the piecemeal small, local, losses of habitat, a 'death by a thousand cuts' each of which is considered insignificant, but the cumulative effect is disastrous.

It is not safe to assume that displaced birds will find suitable habitat elsewhere.

Much of these population declines can be linked directly to the disaster that is befalling the Yellow Sea region where reclamation has resulted in 40% (and rising) loss of the tidal flats that waders use to rest and feed. The Great Wall of China has nothing on the great sea wall of China which holds back the sea and behind which the stranded beach gets filled and built upon.

You can find out more and donate here: Silent Shorebird Crisis