A final (?) flick of the tail for Wader Conservation World Watch and a word about John Gould.


I am reading the final chapters of a book by Isabella Tree about John Gould and rather feel that the idea of bringing people together around the world to one end is somewhat in the spirit of what he achieved. Gould managed to get people to collect on his behalf from every corner of the world and we have tried to do the same with Wader Conservation World Watch (without any birds being killed we trust). However, I hope that any similarity between Gould's celebrated achievements and our own modest ones stop there as I do not find that Gould is a gentleman to whom I would have felt well disposed. 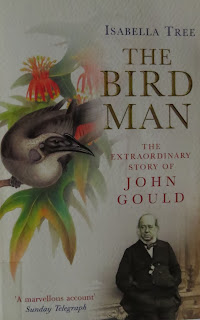 There is no doubt the man had a passion and talent for what he did, but there is also no doubt that a lot of his success was off the backs of others who went mostly unrewarded, unrecognised and some even slighted by him. I sincerely hope that Wader Quest is the opposite of this and that people feel that any contribution they make, of whatever kind, is important, appreciated and acknowledged.

We were surprised the other day to uncover an email from Michael Booth in South Africa who took part in the WCWW and sent us his results. I say surprised as this email only came to light when a spam from the same email address arrived. In the spirit of inclusiveness and placing importance on every contribution we receive, as with every mistake and omission that occurred in the course of putting together and publishing the newsletter, I have now updated it accordingly. The only change that this new entry has made is to increase the number of observers to 182; there were no new species. Other corrections previously made have not altered the numbers although I did count one species twice in the initial stages. So the final tally stands thus:

I do not intend to send out the updated newsletter to all 182 contributors, but if anyone would like the new version please let me know and I'll send you one.

Meanwhile on the subject of John Gould, one thing that I felt as I read the exciting stories of his discoveries and collections in Australia was that I had a great longing to have been a part of this. I know well enough the excitement of that first morning's birding in a new and exotic continent, imagine then what it must have felt like to be seeing things that no-one had ever seen before. It is sad in a way that they had to kill them all, but that was the way it was. In all probability, had I been there, I would not have thought any differently to them, and of course, much of what we now know is based on the great collections and collectors of the day enhanced by hindsight and modern technology.

Among those slighted by Gould the person for whom I feel most sympathy is John Gilbert who selflessly served Gould until his untimely death in Australia. Isabella Tree suggests that Gould was concerned that Gilbert’s collecting skills may outshine his own so he left him hopelessly under-equipped and underfunded and yet the man loyally continued to do everything he could to please Gould; denying himself basic comforts at times in the process. Gould and Gilbert split up to maximise the collecting potential and Gould promised to look after Gilbert's possessions, such as they were, and meet him several months later in Sydney. When Gilbert arrived in Sydney Gould had already left for England three weeks earlier leaving Gilbert's possessions in a tent from where some had been stolen.

In return for Gilbert's lengthy descriptions of birds in nature and boxes full of new specimens for Gould to describe to science and include in his famous book The Birds of Australia, from which he gained much adulation and income, Gilbert would receive a new set of instructions and scarcely a word of appreciation or thanks. Indeed it was trying to satisfy Gould that he undertook his last journey in the company of a group that was not of the highest quality in terms of exploratory skills and when the party was attacked by Aborigines following an event caused by some of the party, it was only poor, affable Gilbert (who had dreaded this event the whole of his time in Australia) that was killed. And what did Gould say of this? Well to be frank, he denied any responsibility for what happened despite exhorting Gilbert to explore the region in which he died saying that Gilbert had made the decision on his own. Gould also distanced himself from Darwin who was courting controversy at the time with his novel theories, even though much of what Darwin was saying was based on the work of Gould, especially concerning the finches of the Galapagos.

It would be lovely to posses Gould's instinctive feel for ornithology and skills at manipulation and self promotion which were driven by a dogged determination to succeed and be lauded and praised in high office. Wader Quest could certainly do with someone with his marketing and publicity skills, however unlike the ambitious Gould it would not be for the benefit of Elis and myself, nor even Wader Quest itself that I would out these skills to use, but rather in the promotion and enhancement of wader conservation and the improvement of the prospects of so many millions of these precious birds that seem hopelessly doomed by the indifference of mankind.

Note: Gould described 8 species of wader in all. Apart from those shown above he described three species we didn't see on our travels; Little Curlew, Inland Dotterel and Plains Wanderer all in 1841.

Posted by Rick Simpson Birding at 11:36