Well it’s that time of the year again. Shorebirds are migrating from their wintering areas and up to the breeding grounds in northern China and Russia. Of course it’s beneficial for the birds to stop off and refuel on their arduous journey and that’s what the Luannan Coast on Bohai Bay is famous for, the important feeding grounds for migratory shorebirds here. Once again the Global Flyway Network will be studying the shorebirds as they pass through this critically important site. GFN are here for their 7th consecutive year. As always the team arrived early into the second week of April whilst the shorebird numbers are still low. Although the team members will increase in number later into the season it currently consists of Adrian Boyle a Bohai veteran from Broome Western Australia and Bob Loos a GFN team member from the Netherlands. This season started a bit slow with Shorebird numbers. Normally when we first arrive the mud flats have hundreds of Dunlin, Eurasian Curlews and Grey Plovers but very few were to be found. The first 3 days were spent checking all the usual haunts without any luck. Then on the 15th they arrived ‘en masse’ and soon we had hundreds of Great Knots to scan.


It still took several more days for the Red Knots to arrive and by the 18th of April the count of 200 from the 12th had risen to 6,000. We have conducted a full count off all our sites for 6 species and the totals comprise of Great Knot 6,636 Red Knot 7,031 Bar-tailed Godwit 1,105 Black-tailed Godwit 14,040 Grey Plover 2,867 and Eurasian Curlew 1,686. Several of these species are still increasing daily and we expect larger counts over the next few weeks. The Black-tailed Godwit and Eurasian Curlew counts are the largest we have ever had during our visits. However it is difficult to look too positively on this, it is unlikely to be an increase in the populations of these birds given all the information we have on them. It is more likely they are from other sites that have been lost to development.

One of the obvious changes we have seen since last season is there are now lots of markers with flags on them. These are everywhere in the saltpans and cover the mudflats every hundred meters or so. We have since learnt that this is the first stage of more oil exploration and there are ‘sensors’ across the mudflat. On top of that a large ship and several ‘zodiacs’ are setting off explosions in the water! The sensors record the data and indicate where the oil might be. However to get the data from the sensor you need a super loud boat to run across the mudflats to collect it! This, of course, disturbs the birds when we are trying to count and scan. The good news is that we have heard the exploration work will be over in a few days. If they find oil the news will not be so good for the birds. 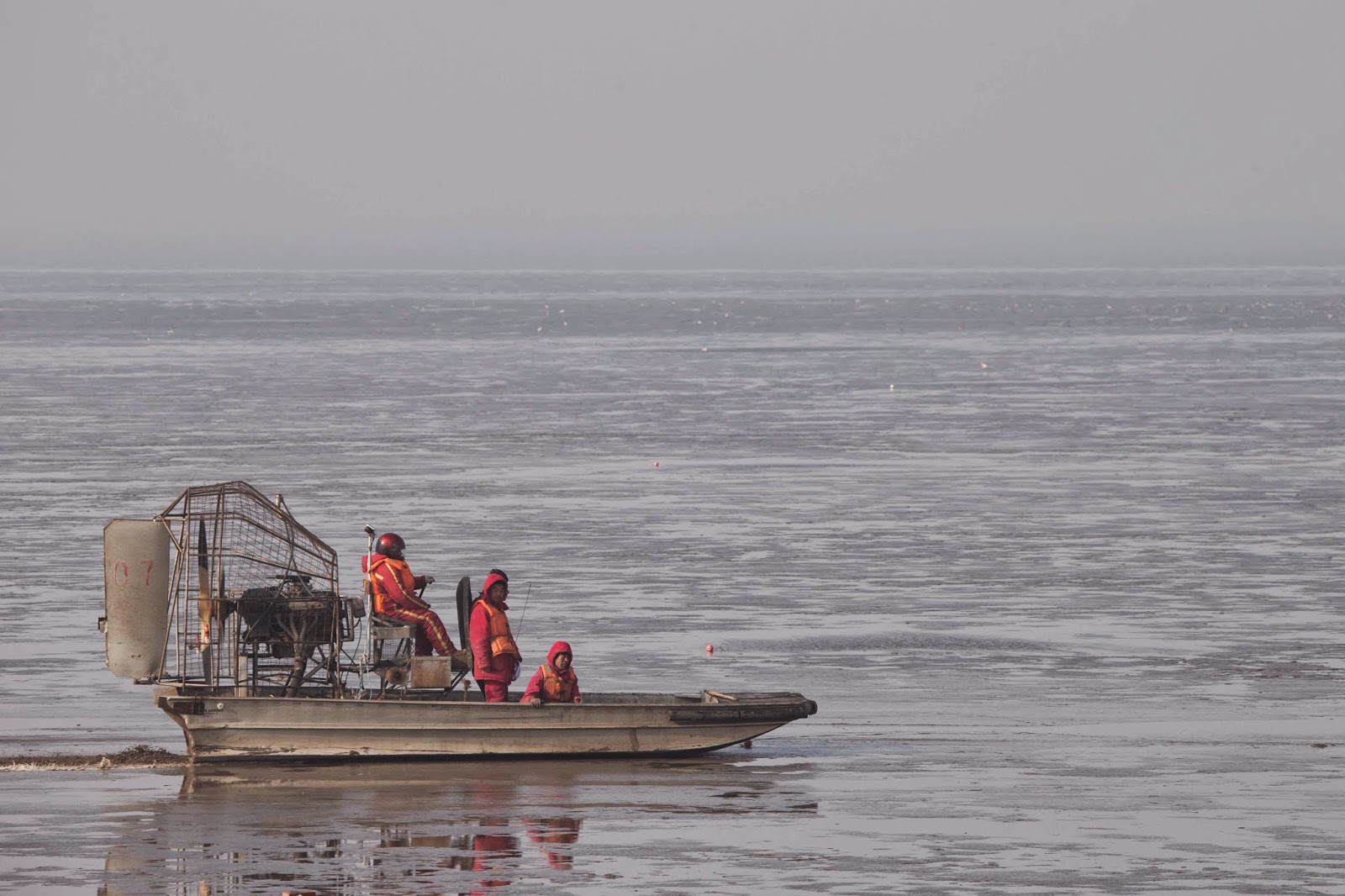 The road that we take from our apartment in Nanpu to the mudflats every day is a little worse for wear, to say the least. It takes us approximately one hour depending on traffic and how deep the puddles are. So it was with great excitement that we looked out the window on our first day to see a new road being built. It is quite large and will probably be a 4 lane highway by the time we visit next season and cut down our travelling time. Yipppeeee!!!!!! Oh hang on where is the road going? Yep true to form, as we have learnt over the years if you find a good spot for wildlife don’t expect it to be there for very long. The highway is going to pass straight through 2 of the best salt ponds for birds that we have ever seen in our study site (or anywhere we have worked around the world actually!) When the conditions are right as on May 16 2013 when we recorded 95,833 birds in one pond and on May 29 of the same year we had 34,200 Red Knot feeding in the neighbouring pond. They have started to build a wall through the middle of the pond to put the road on it but we are not sure yet if they will totally drain it, build on the pond adjacent to the road or how the new road will affect water circulation and depth. I guess time will tell. Will there be other suitable ponds for the birds to use?
Despite all this the area remains brilliant for birds (but for how long can they persist?) So far we have seen 118 species in 10 days. Some highlights were 4 endangered Oriental White Stork including 1 on a nest, Brown-eared Bulbul and Eurasian Woodcock at the park being a first for us and 9 Black-necked Grebes at Zuidong.
Posted by Rick Simpson Birding at 13:59