'Western' and 'Eastern' Willet? What's that all about?

Willet Tringa semipalmata. Formerly in a genus of it's own Catoptrophorus and originally described as Scolopax semipalmata by Gmelin in 1789.

Willet has traditionally been considered a single species and indeed still is officially and by most people. The fact that the two subspecies were possibly contenders for splitting came to my notice when Elis and I found the first documented record of the species in the state of São Paulo. During research for the article that we wrote about the event I discovered that the winter range of the two forms is little understood and not at all well known. 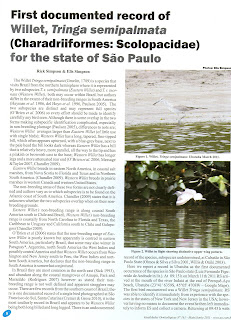 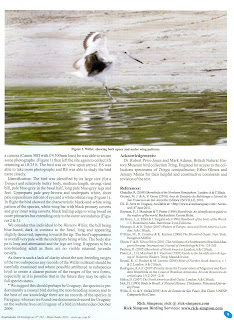 The winter range of 'Eastern' is described in volume 3 of the Handbook of the Birds of the World (del Hoyo et al 1996) as being along the Atlantic and Gulf coasts of the USA south to Brazil.That of the 'Western' is described as coastal south USA to north South America mainly on the pacific coast, south to Chile. This obviously set my mind thinking; in theory this bird we found should then be an 'Eastern' bird, but was it? I read on to confirm this theory in my own mind.

It was then in The Shorebird guide (O'Brien et al 2006) that I read "may represent full species" and my interest was piqued still further, it now became paramount to discover which (sub)species I had seen. I read what this tome had to say about the winter ranges. It stated that the winter range of 'Eastern' was "poorly known but apparently centred in east South America, particularly Brazil; some may winter in Paraguay (surely he means Uruguay?) Argentina and north South America". Even more weight then to the idea of ours being 'Eastern'. The text also goes on to say that 'Eastern' has apparently not been documented in the USA in winter. His explanation of the wintering range of 'Western' implies that the birds are mainly on the pacific side of South America as well as Cenral America, the Caribbean and coastal USA, but does conclude with; "Winter range in South America somewhat conjectural". I now really needed to identify the form I had seen.

Despite the range suggestion from the literature, our bird did not seem to fit into the description widely given for 'Eastern'. The bill of our bird fitted much more into the long, tapering and slightly up-curved description of 'Western' than the shorter. blunter, thicker bill of 'Eastern'. O'Brien also mentioned that the bill of 'Eastern' is often pinkish brown at the base as opposed to steely blue in 'Western'. Added to this our bird was pale grey (whereas 'Eastern' is browner on the upperparts) and looked attenuated as in 'Western' with a relatively elongated rear end and the legs appeared rangey. What we had was a 'Western' Willet I was sure.


We were also present when two birds dropped-in to a marsh in Rio Grande do Sul. These birds appeared to be 'Eastern' Willets. Local guide, ornithologist and researcher  Rafael Dias, who we were with at the time, thought this interesting and thought that the complex wintering situation of these birds would probably be worth a paper. Recently I have been invited to contribute to a paper about Willet occurences and the (sub)specific identification of them in the south Brazil,Uruguay and Argentina region by Rafael and a number of erudite South American ornithologists; they have at least been able to prove that both 'Eastern' and 'Western' Willet can and do occur on the Atlantic coast of Southern Brazil, Uruguay and Argentina.

At the extreme ends of the scale 'Eastern' and 'Western' Willet are quite different particularly in breeding plumage, but as usual it is possible to find individuals that don't seem to fit either taxa, they fall somewhere in the middle or seem to have a mixture of features. Whether this is due to interbreeding, a clinal change or simply means the features are not 100% reliable, who knows? The bird below, by geography and timing, must be an 'Eastern' Willet, it was holding territory on the Connecticut coast. It is dark and well marked on the breast and the bill base is pinkish. But, the bill looks slightly up-curved to me and the back end of the bird looks decidedly attenuated. So are these reliable features in the field? People's perception of these features can be quite different.

Here's another 'Eastern' this time in Texas. The plumage and bill all look good but what about this back-end feature, this too looks attenuated to me.


This is a 'Western' Willet, very little marking on the breast and a blue based finer tapering bill that is slightly up-curved.


But what about this one? Bill shape, breast and flank markings good for 'Western'; apparently rather blunt at the back end and pinky bill base good for 'Eastern'. This is rather difficult, to be sure I think it best to see them on their breeding grounds!

According to several references, winter plumage 'Eastern' Willet does not occur in the USA, so if this is the case you can be sure that winter birds, like this one below taken in Florida are all going to be 'Western' Willet, but, apart from the base colour this bill doesn't look that much different from the bill of the breeding 'Eastern' bird below it and the upperparts are quite brownish in my view. 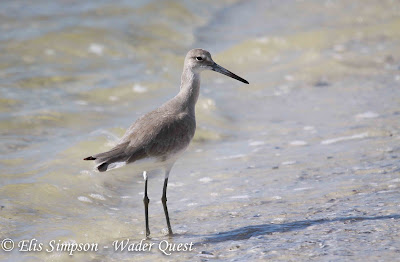 There may or may not be a case for splitting these forms of Willet, and it may be rather less simple to do in the field than the literature may suggest, but it certainly makes looking at Willets much more interesting!

Posted by Rick Simpson Birding at 02:31