Now that was an unusual day.

It started off rather samey with me and Elis trying hard to catch up with everything we needed to do leading up to our trip to the USA on Thursday. However, when Elis discovered that there was a Grey Phalarope near Clevedon in Avon things took on a new urgency. There were two very good reasons for us to try and see this bird, one, it would be a lifer for Elis and the other, it would save us about £1,000 by saving us a trip to Iceland for Wader Quest.

After a bit of argy-bargy on twitter, which I still haven't exactly got my head around, and some helpful comments from David Pritchard @birdfossil, Rob Jones@ Glambirder, our old friend Oliver Simms@ OSimmsBirding and directions from Jason Williams@Clevedonbirder we set off, more in hope than anger so to speak.

We left in beautiful sunshine with clear blue skies and arrived two hours later, after the 120 odd mile journey, with threatening clouds glowering on the not too distant horizon. We eventually found the correct parking place and set off. It took us an hour exactly to get to the bird! A certain amount of grumbling, not just from myself, and predictions of gloom and doom, the bird having had ample time to have decided to go elsewhere, accompanied our hour long trek. The gates and turnstiles that we had to negotiate reminded me in a very cruel way that I wasn't as young as I used to be as I found it difficult to traverse them with any degree of dignity at all, good job we were in the middle of nowhere.


The bird was there. It was miles away of course, but it was there. I decided to do a piece to camera to celebrate, only to discover Elis had left the video camera in the car! My suggestion that she nip back for it was not well received. The trusty back-up compact with video was brought into play.

There was a very pleasant family already there, a gentleman and what I assume in a cosy, old fashioned sort of way, was his wife and their delightful rosy cheeked daughter. They seemed somewhat amused, or more likely bemused, by our antics and giggled when I did my piece to camera, which, I have to say, was a masterpiece of talking head TV, a masterpiece that is until Elis noted that she had forgotten to roll the camera. Now this amused our new friends,
"Just like real Television!" the lady commented chuckling to herself. Too true.
Of course the second take is never as good as the first which is spontaneous, but hey ho, we got it done, and I then launched into a monologue aimed at the unsuspecting fellow birders entitled "We are Wader Quest" and bored the pants off these poor people who, not surprisingly, glanced skywards and muttered something about rain and fled!

Of course they were not wrong, and as Elis and I discussed how much time we would give this bird to get closer for a photo, it started to rain, gently at first, and then, I felt with a sense of inevitability, it strengthened to a downpour.

The phalarope moved into a side channel, a little bit nearer. I said that if, when it emerges, it turns right and therefore in our direction we'd stay a bit longer, otherwise we'd leave; It turned right!

I watched it through the bins as it got closer, I grabbed the video camera again and started filming as Elis clicked away, closer... 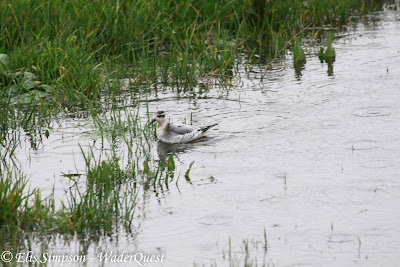 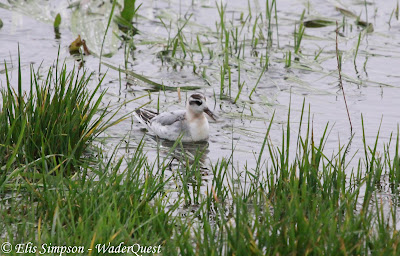 this would be the best footage of Grey Phalarope, ever, and then suddenly! 'Memory Card Full'! Noooooooo! I tried in vain to find another as the bird passed within yards of us, hearing Elis' camera shutter bashing away all the while, and before I had time to resume filming it turned the corner and started to move away.

It was pelting down by this time so we left and made the hour-long hike back to the car our backs hunched against the wind and rain.
As we approached our haven quite suddenly the handle on my tripod dropped off into a murky, muddy puddle. In dismay I searched for the screw threaded plastic knob that secured it, I didn't find it, I started to walk back along the track to Elis' dismay.

At this point a couple walking their dog stopped to ask if we had seen anything unusual, I enthusiastically told them about the phalarope.
"Phallic grope?" never heard of that one the gentleman quipped. Sigh!
They asked what I was casting around for on the floor, and I explained my lost knob (if you'll pardon the expression) and we parted company.

A few seconds later we heard a whistle and turning we saw the gentleman bounding back towards us full of glee, he had found a black knob, fitting the approximate description of my lost item. Elis went back to meet him with the detached handle in her hand, the screw thread fitted, what a piece of luck, we thanked them and parted.

To my horror, when I tried to reassemble the tripod, would you believe this knob, that fitted exactly, was not the lost knob and would not secure the handle. What are the chances of them finding a knob with an identical thread, that wasn't the one I'd lost.

But hey, we saw the phallic grope!