Message of support for Wader Quest from Don Taylor

My Quest for Waders


As soon as I heard that Rick and Elis were planning such an extravaganza, in support of the threatened but unique Spoon-billed Sandpiper, I was interested to learn more. Partly because I once wondered whether it would be possible to see all the world’s waders in one year, if money was no object and I was free – my partner is not a birder. The logistics themselves would be a considerable challenge, timing the seasons when each species is easiest to see, and a great many are far from easy to see, let alone within a tight schedule. So it hasn’t progressed beyond a vague dream.


This summer I joined the second of three Heritage Expeditions, entitled “In the Wake of Bering – in Search of the Spoon-billed Sandpiper” on which I met Debbie Pain, the co-ordinator of the Spoon-billed Sandpiper project for the Wildlife and Wetlands Trust. We explored three new areas, never previously visited by birders, but sadly, failed to find any new breeding pairs. However, it was fascinating to learn so much about the project, meet the people involved and see the plans for raising young in captivity, within their breeding area, prior to releasing them.


My own quest to see all the waders of the world is reaching the end and maybe an illustrated book will result. I’m travelling to South America this December, with Tony Prater and our guide Mark Pearman, who has accepted the challenge of finding the four snipe species we have as yet failed to find: Puna, Giant, Imperial – only heard so far – and the most difficult, Fuegian Snipe. I’ll then be left with just Australian Pratincole, which has eluded me on two trips as a result of changes in the weather, and Great Thick-knee, which I really should have seen on my trips to Nepal. 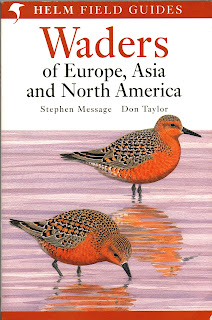 Posted by Rick Simpson Birding at 10:42