It was cold, bitterly cold. We trudged from the car park at RSPB Snettisham to the high tide spectacular viewing point. There was a cutting wind coming from the north but the birds did not seem to feel it as we did. The sky was clear except for a diffuse dark ridge of cloud on the western horizon and the sun was climbing behind us to the east yet its light did not penetrate the cold to provide any sort of warmth. Except for the cold, these were pretty much perfect viewing conditions for the wader spectacular that Snettisham has to offer. The birds that we had come to see formed several huge roosting flocks in the cradle of the estuary spread out before us.

Suddenly they were up with a thunderclap of simultaneous wing beats and alarm calls. The reason? A passing Marsh Harrier had done us the favour. 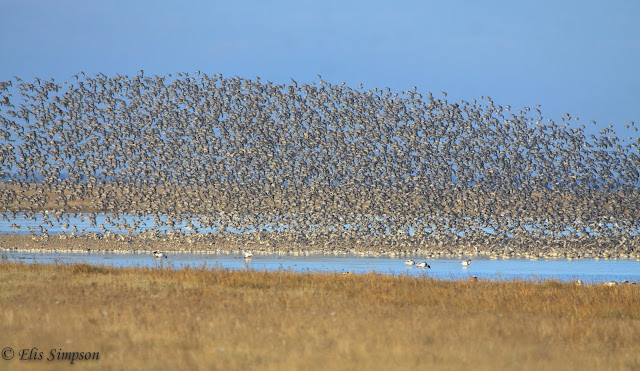 At first they dashed headlong, low over the water as one, then the wave action began and a myriad white dots merged into one living being, thousands upon thousands of birds and twice as many beating wings. 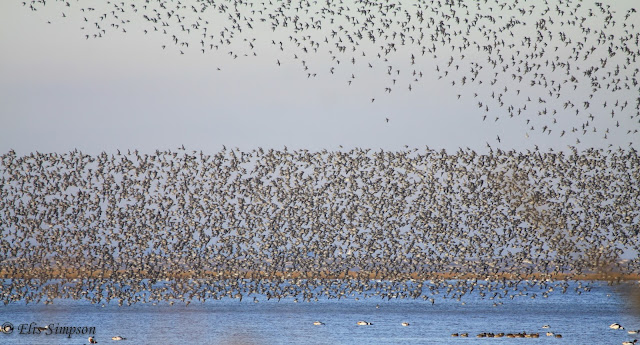 Suddenly the squadron leader banked and a millisecond later the next followed suit, and the next, then the next as a ripple rolled down the flock. The hitherto white, birds now dull grey-brown had all but disappeared against the low cloud on the horizon then, as if by magic, they just as suddenly reappeared. 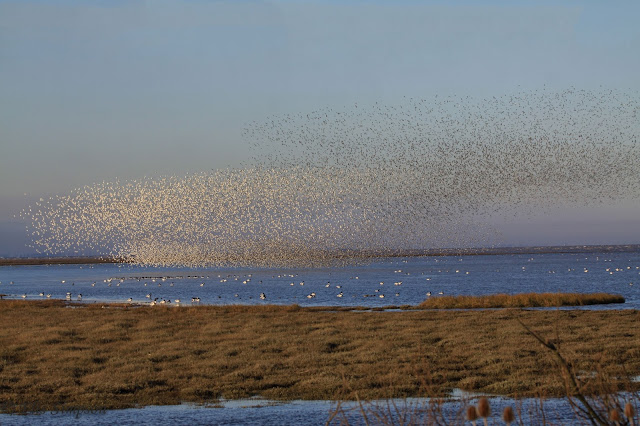 They spiralled upwards like laughter in an empty room, the godwits now separating and flying higher than the knots, but still in one homogeneous block. As they shot skywards they formed a towering biomass of life which suddenly collapsed like a burst balloon full of water and they flowed out across the surface of the sea forming a living stream. Next they turned through 180° and sped back towards the beach having taken on a tubular form, they performed a victory barrel roll like half of the double helix in the DNA belonging to some unimaginably immense being. 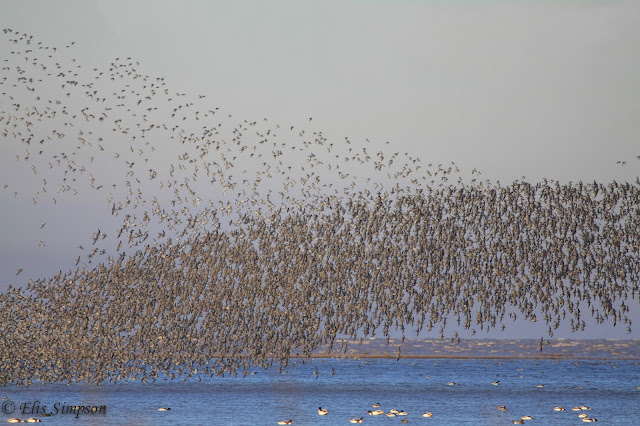 They circled once, then again, gaining height in a blizzard of thrashing wings, flickering from dark to light like a fancy illuminated bill board in Time Square. The form morphed from globular mass to undulating string recalling a massive caterpillar traversing the estuary. 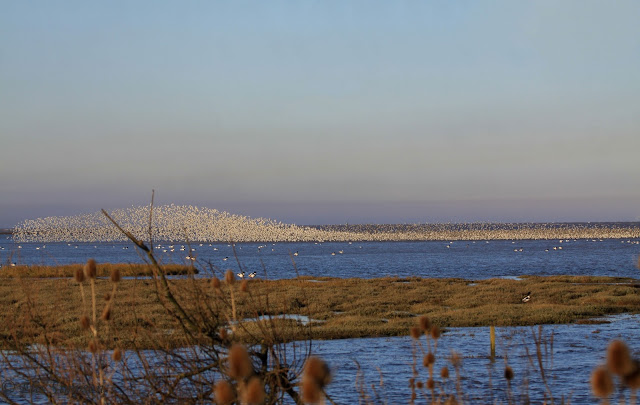 They then rode up to form a dancing cobra whose head breathtakingly disappeared down its own throat to form a darting arrow as though they had been shot from Cupid's bow towards the very heart of the estuary. 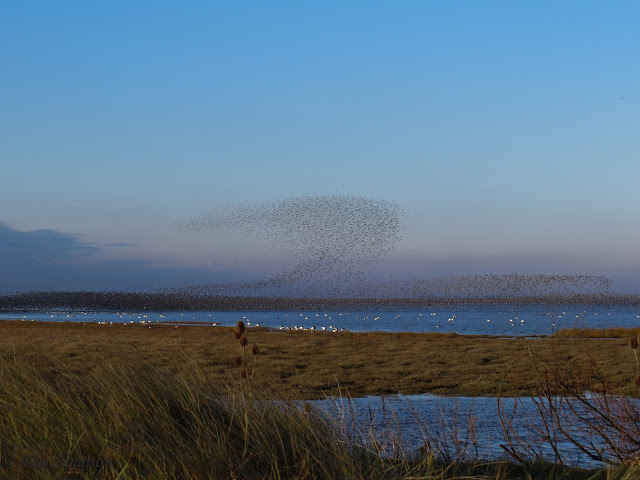 At last the frantic flight began to wane; the birds became more relaxed and formed now a gliding cloud over their chosen roost spot. 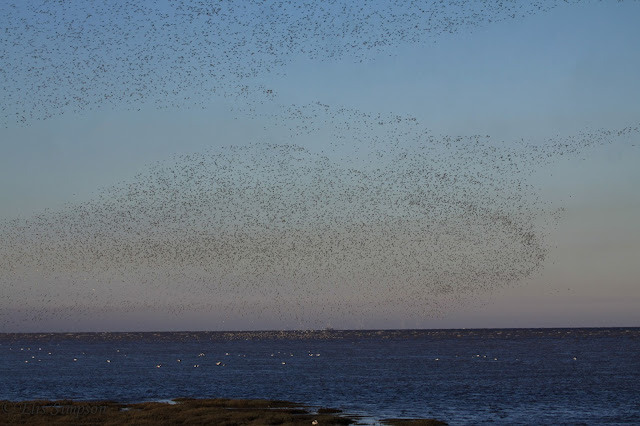 Then, as with an unexpected April shower, it started to rain knots and godwits as they tumbled and wiffled out of the sky. Plunging vertically downward they pulled up at the last moment to cruise in level flight over the heads of their fellow acrobats that had alighted before them. Finding a space they swelled the front of the flock as they landed and settled slowly into a sizzling pancake of excited birds. Slowly they cooled and became still and quiet once more, it was as though this miracle of natural finesse had never happened at all. 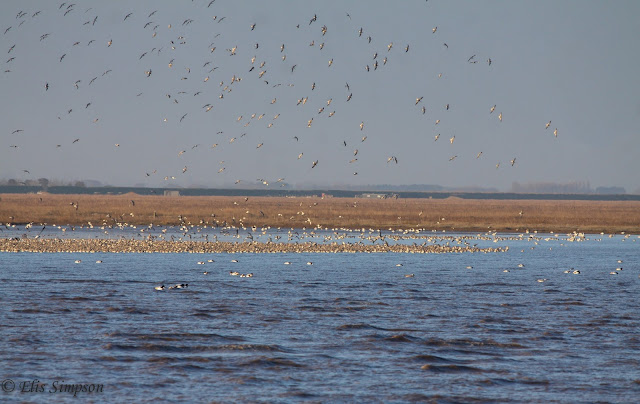 Several time we were privileged to witness this display, and each time it was different, an infinite number of shapes and forms were painted like a fresco in the vaulted ceiling of the cathedral skies above us. 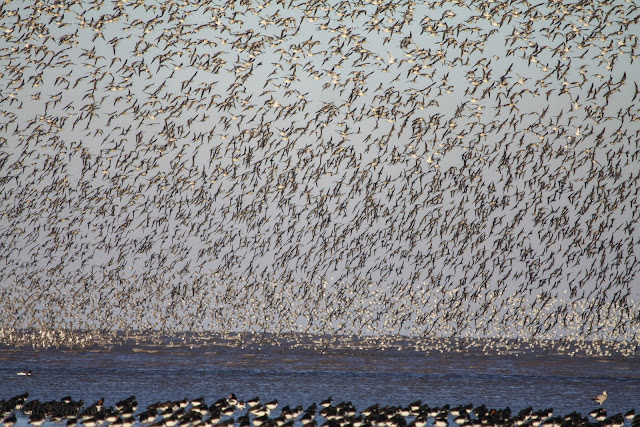 Just sitting there, in awe of this exuberant demonstration of the power and beauty bestowed upon the natural realm around us, it became clear to me that a world that did not contain such events would be an impoverished one indeed. 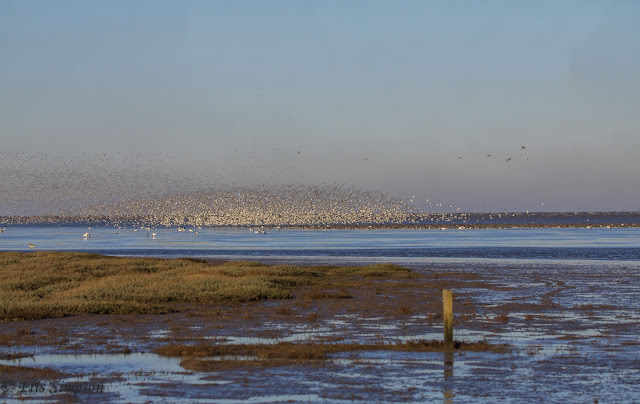 Each of those birds will soon be risking everything to return to their breeding grounds to try against the odds to replace themselves before they die, simply to maintain their species. This basic need is becoming less and less achievable as places for them to breed, stop over on migration and pass their non-breeding period get scarcer or degraded. 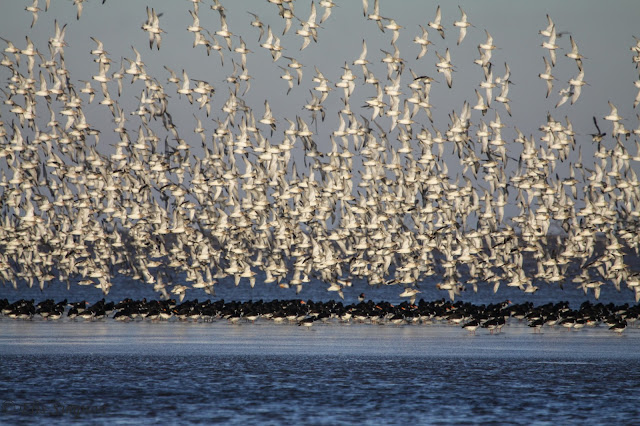 For a species as successful as ours has been, you'd have thought there could be a little room for compassion and care for our fellow travellers through time and space wouldn't you? But the cleverer we get it seems that the innate nature within us is somehow blotted out. Technology, growing economies and personal gain are trump cards that render all other considerations redundant. 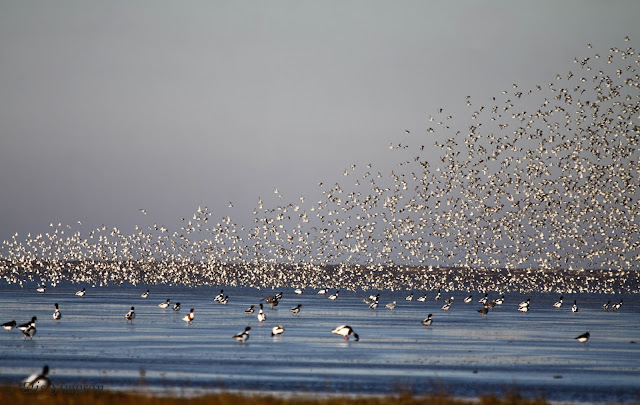 And yet we fight on and mornings like these are what make us do so. In the end we may not win, but that does not mean we should not fight each battle with everything we have. 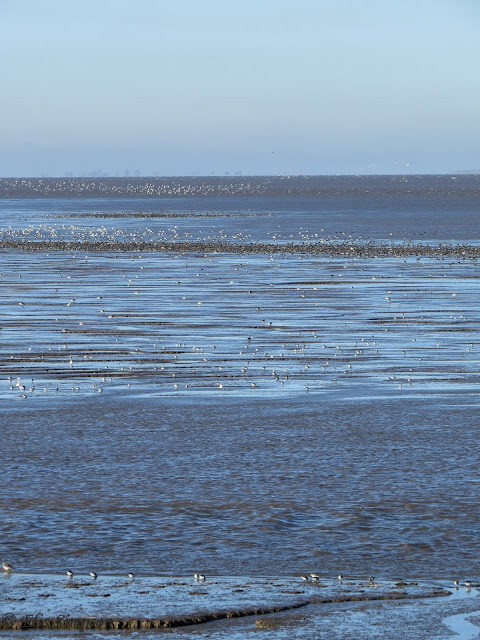 The tide was now dropping and the birds were beginning to leave and spread across the expanding mud as the sea inhaled, sucking its lapping edge back towards its heart. At that moment I heard the noise of an approaching jet engine, or so I thought, but was startled when not ten feet above my head another squadron of knots flew from their roost site on the pits behind me to join the joyous celebration of life, to be lived for another day, out over the estuary. 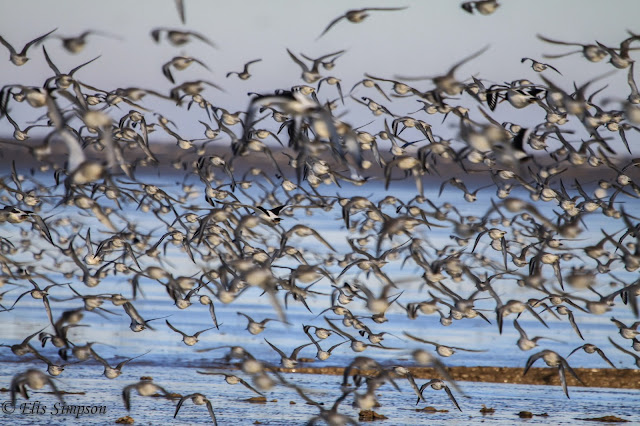 Posted by Rick Simpson Birding at 09:04