Are you joining in eBird's Global Big Day to celebrate World Migratory Bird Day? We are!

This weekend it is World Migratory Bird Day. Hopefully many of you will be out there looking for migrants. 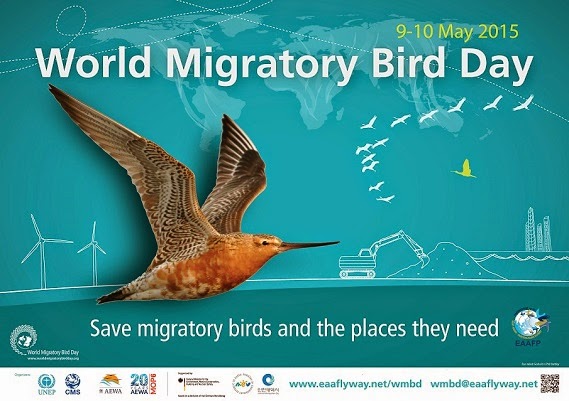 The people at eBird have put a new angle on the weekend, much like our own World Watch last November they are trying to organise a World Big Day on the 9th of May to get people everywhere to join in this vast citizen science project and collate their sightings for the day and submit them to eBird. If it works as well as it could the result will be tremendous! 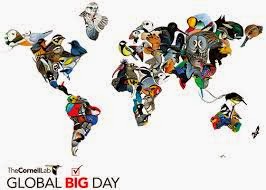 But of course you'd expect us to point out that WMBD is not just about cuckoos, doves, quails swallows, warblers wheatears and the like, although these birds are significant and important, it is also about waders of many kinds. We will be thinking especially about some of them out there on lengthy migrations to their breeding grounds far to the north. Like the Little Curlews we have been following on their way from Australia to China and Russia and the Red Knots battling from Patagonia to the Arctic. We will also naturally be thinking about the millions of birds that have to migrate via the Yellow Sea including the Spoon-billed Sandpipers, Great Knots, Nordmann's Greenshanks and the Bar-tailed Godwits returning to Alaska. These birds are the most threatened in the world with their habitat disappearing at an alarming rate; just witness the reports we have been posting from the Global Flyway Network team in China. It is truly scary, and this is what makes Elis and me get up in the morning to do battle for another day in the development of Wader Quest.


Of course we at Wader Quest are going to do our bit. We'll be out looking for waders on our local patch in land-locked Buckinghamshire and although it is unlikely that we'll see 'big' numbers we'll give it our best shot. There has been a Curlew Sandpiper and Wood Sandpiper seen at Manor Farm and a few Dunlins have passed through. We have both Common Ringed and Little Ringed Plovers and Common Redshanks plus breeding Northern Lapwings and Eurasian Oystercatchers. There are a few snipe around, but whether we'll get lucky and see one remains to be seen.

We would urge you all to get out and look for migrants of whatever form they may take, and remember that mother nature has already made life hard for these valiant creatures whilst we, in our ignorance and greed, are making it still harder for them to survive.

Whatever you can do, do it, it may not seem like much, but if we all play our part and do what we can together our actions can be significant.

Posted by Rick Simpson Birding at 13:23