Fulfilling weekend in Cheshire and Wirral.

Friday afternoon saw Elis and I heading up a heavily congested motorway network taking four hours to complete a three hour journey but we still arrived with plenty of time for our talk to the Cheshire and Wirral Ornithological Society (CAWOS). We were greeted by a packed hall of around 50 people which is always encouraging. Once again we were humbled by the reception Wader Quest and its aims were given. As for the talk, our usual yardstick of no-one drifting off or leaving was met but one poor gentleman in the front row put his back out in the excitement of it all. 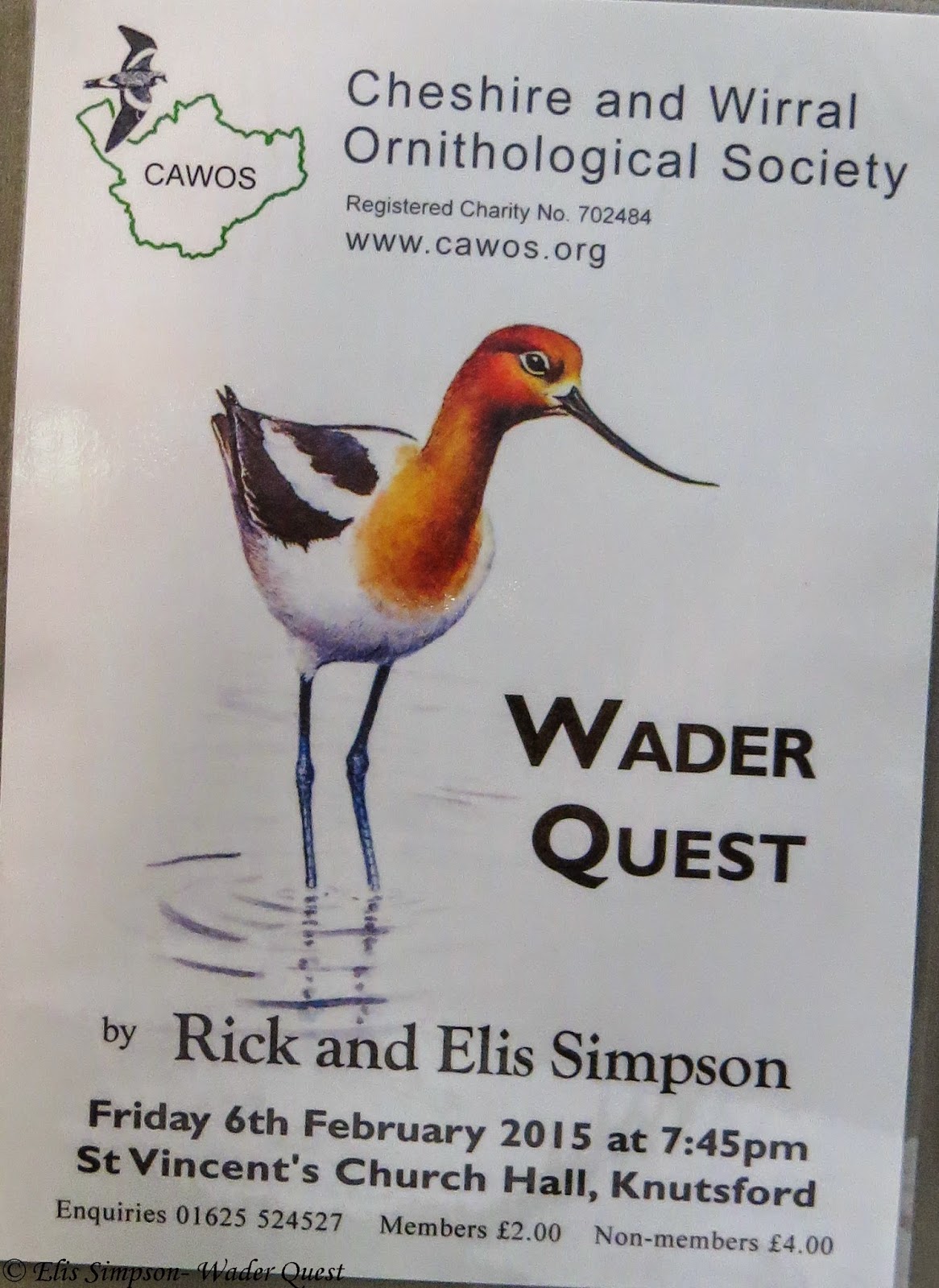 We were invited by Clive Richards of CAWOS who kicked off the evening with club notices and then it was our turn to talk about some of the world's waders, the problems they are facing and what exactly we planned to do about it!


Differing from our usual determination to return home after each talk, we decided to stay up near Knutsford for the night. The reason for this change of heart was that during the week we had communicated with Karen Leeming of the Dee Estuary Volunteer Warden (DEVW) scheme who it turns out had organised a high tide wader watch on the seafront at Hoylake. That was too much of a coincidence and good fortune for us to ignore. Being keen to see as much of the area as we could in one day, we asked Karen for some ideas and she sent us an itinerary which we tried to follow, starting first thing at the RSPB Burton Mere reserve.


It was there that we met Dan Trotman of the RSPB who gave us an overview of the reserve, which I am sure deserved much more of our time. The waders we saw there were several hundred Northern Lapwing, a number of Golden Plovers among them, half a dozen or so Common Redshanks and a flock of 10+ Eurasian Curlews seen in a field on the approach to the reserve.

We discovered that Dan and the RSPB were to be present at the wader watch and Elis and I set off in the direction of Hoylake to make sure we didn't miss the tide. Sadly the weather conditions (high pressure with almost no wind) meant the height of the tide was not very impressive and not conducive to close up wader watching. Even so, with the scope looking out to a sand bank we could see thousands of birds, some resting others wheeling about in the entrancing way that they do and we could only imagine what the spectacle could have been like if the tide had pushed them all closer.


Watching waders in the UK is a bit frustrating at times. When you consider how the Nearctic waders seem quite happy to potter around at your feet and allow close approach our birds seem so much more wary and of course this is not helped by the huge numbers of off leash dog walkers who frequent our shores. In the hour or so we were there we witnessed at least 20 dogs off leash many of which chased the nearby gulls (which included a Mediterranean Gull).


The waders were unmolested on this occasion as they were too far off for the dogs to bother with, but had they come closer there may well have been some conflict of interest there.

Among the birds that ventured closer to us were Common Redshanks. The Dee Estuary is the most important area for these birds nationally and on this day numbers were impressive although we didn't count them.


The sand bar had Grey Plover, Eurasian Oystercatchers, Red Knot, Dunlin, Sanderling  and Eurasian Curlews although surprisingly Elis and I did not find a single Common Ringed Plover although they must have been hiding among the others somewhere we felt.

We spent some time talking to Karen,  Lynne Greenstreet and Sheila Ryde about what DEVW is all about. The organisation has been running a volunteer warden scheme on the tidal area at West Kirby on the Dee Estuary since 1986 when it was set up by the Wirral Borough Council. Over that time they have been monitoring the wader roosts and preventing disturbance by their presence on the marshes and beaches. In addition they engage with the public showing them the birds and educating them as to the birds' need of space to go about their business undisturbed. They utilise posters exhorting other beach goers to respect the waders' space and have been very effective in doing so; Karen commented that a poster can act as an additional warden at times. These posters are not permanent however, the volunteers carry them out and erect them on each visit. This wader watching event was jointly organised by DEVW, Wirral Borough Council and the RSPB.


Our next port of call on Karen's itinerary was the highlight of the day for us. We love Purple Sandpipers, who wouldn't, but Karen's suggestion to visit New Brighton Marina to see these birds roosting on the pontoons there was too good to miss.


The Purple Sandpipers are only around at high tide, so it meant leaving Hoylake and getting over to New Brighton fast. We were delayed a little trying to find somewhere to park, but eventually got there to find 10 Purple Sandpipers among the 40 odd Redshanks and 120 or so Ruddy Turnstones along with a single Sanderling.


There were a disproportionate number of birders there too, but they were not all wader lovers like us; among them was old acquaintance Gary Waddington who famously helped us get Eurasian Dotterel at Pendle Hill during our travels. In fact some of them may not have even noticed the waders on the pontoon if it had not been for the Laughing Gull marching through the flock from time to time. This was a bit of an unexpected bonus for us especially after seeing the Mediterranean Gull earlier on.


We then headed home, but not before stopping at Parkgate to look for Short-eared Owls, which we sadly failed to find, although we did add Black-tailed Godwit and Common Snipe to our wader day tally. We also enjoyed some splendid pie and chips and locally made ice cream which rounded off the day rather nicely setting us up for our long and relatively uncomplicated this time, drive home.

Posted by Rick Simpson Birding at 15:32