The Spotted Redshank breeds in northern Scandinavia and across Arctic Russia. The wintering quarters are across sub-Saharan Africa north of the equator for the most part, sporadically around the Mediterranean across Asia to South-East Asia.


It is a slim and elegant bird with a very striking white-spotted, dark grey or black breeding plumage, the females are slightly less black than the males. The bill is mainly black but the basal half of the lower mandible is red or orange. In this plumage it is unmistakeable.

In winter they look much more like the Common Redshank and care must be taken to identify them. They have white underparts and a light grey back similar to Common Redshank, but the bill is longer and thinner and has a slight droop at the tip and the legs are longer. They also show a distinct white supercilium especially in front of the eye creating a distinct dark eye line.

Juveniles can be distinguished by their barred underparts.

The Common Redshank is a smaller, less elegant and striking looking version of the Spotted Redshank with a heavier, shorter bill which is red or orange on both the upper and lower mandible. There are six subspecies spread across from Iceland in the west to China in the east. In breeding plumage these birds are brown above and white below with varying degrees of dark spotting especially on the underparts.

In winter the underparts are white and unmarked and the upperparts plain brown.

The juvenile can be distinguished by the notching and fringing on the upperparts.

The Common Greenshank is very much an old world species that unlike the previous two species penetrates well into the southern hemisphere across most of southern Africa and Australia in the non-breeding season. It breeds from northern British Isles across Scandinavia and Russia to the Kamchatka peninsula in Russia.
In breeding plumage they have very streaky head, neck and chest but in winter the streaking is confined to the back of the neck and crown.

Juvenile birds are slightly browner on the back and have pale fringed upperpart feathering wu=ith a dar subterminal bar. The pale fringing can be creamy instead of white.
Nordmann's Greenshank is the rarest of our selection being Endangered according to BirdLife International. The population is less than 1,000 mature individuals according to recent surveys and the population as a whole is declining rapidly due mainly to habitat loss where tidal areas are being turned over to industry and agriculture.
In breeding plumage they are heavily spotted around the head and neck which gives them their alternative name of Spotted Greenshank. One of the features that distinguish this species given good views is the line between the upper and lower mandibles being slightly curved producing a 'smiling' effect.
The bi-coloured yellowish bill with a dark tip and the yellow legs are other pointers to this bird's successful identification.
To finish, Spotted Redshanks (see the kink at the end of the bill?) against a Thai sunset, one of Elis' masterpieces. 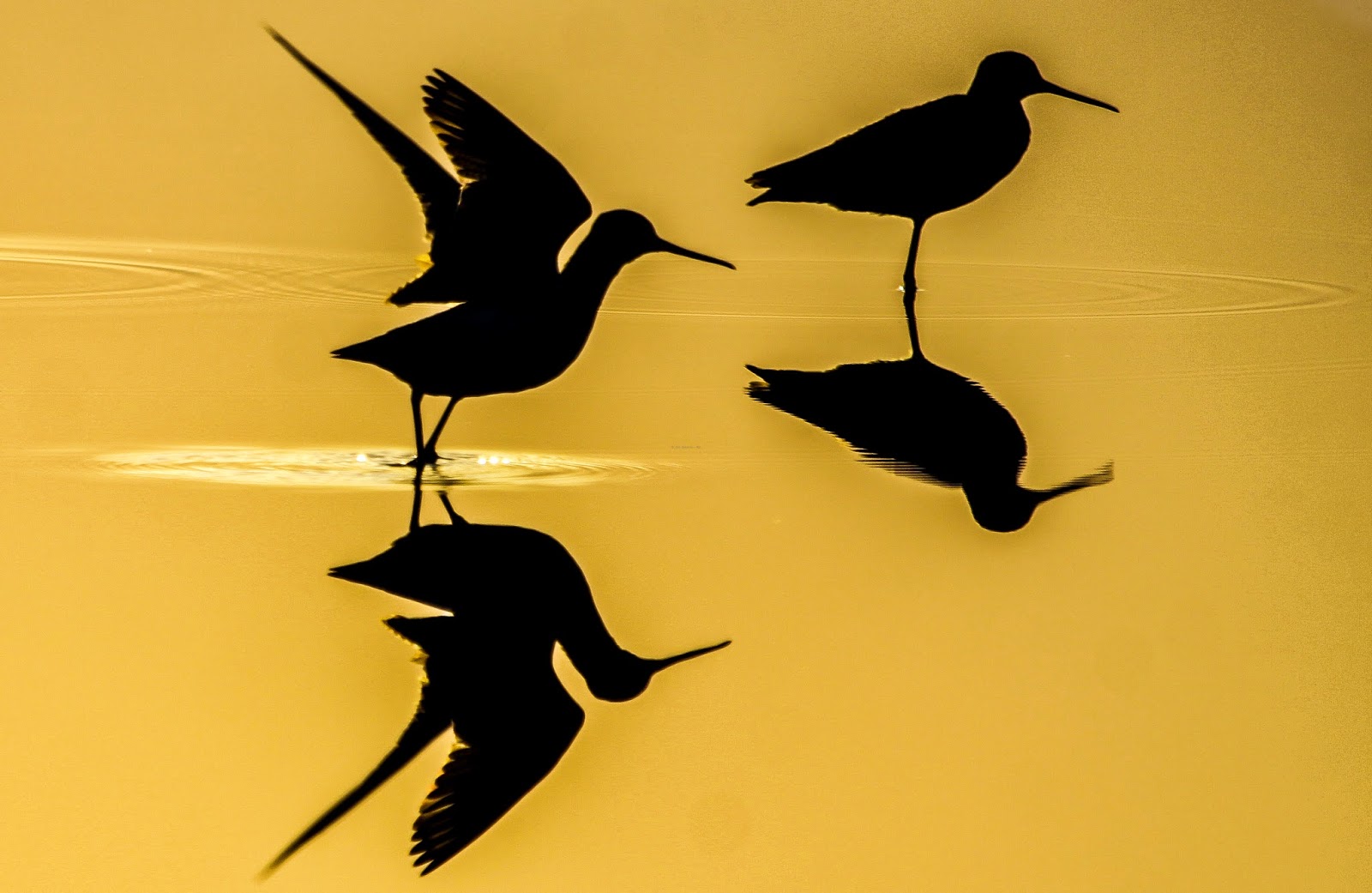 Posted by Rick Simpson Birding at 00:53