The Gambia was quite an experience, I have been there before so knew roughly what to expect, but Elis had not and was, I think, a little overawed by the constant battle to stave off would be 'service providers'. Even though I had had some foretaste of this intrusive culture, it was nonetheless wearing.

We really only had three bouts of birding for Wader Quest; the first afternoon and our trip up river plus a short side trip out to Bijilo Island where there is a wader roost.

The first afternoon was very productive as you will already know with three of the six possible species being seen within a short walk of our hotel at Kotu Bridge. Black-headed and Spur-winged Lapwings and Senegal Thick-knee.
Our guide was a quiet, very friendly (aren't they all out there?) and affable chap by the name of Modou Saidy who we had been introduced to by Seedy Saidy his uncle and ex Gambian bird guide who now lives in the UK. Modou showed that his experience with the local birds was good and he always knew where to look for what and to my surprise he was well up on his wader ID too. On our second day he arranged for us to visit Bijilo Island where waders roost at high tide. In order to get there we had to take a small boat and in order to get in it we had to run the gauntlet of the incoming waves resulting in the slower among us getting a bootie of water!
In fact there were not as many birds there as we had hoped, but we did see Curlew Sandpiper, Bar-tailed Godwit, Sanderling, Common Ringed Plover, Ruddy Turnstone and a single Kentish Plover.

The next big thing was going up river the next day. The crossing over the Gambia River was quite alarming, I was very glad we had Modou to look after us and show us the ropes otherwise we'd probably still be standing bemused on the dock wondering what was going on. There were people running everywhere when the boat gates opened, even before all the passengers had got off the surge forward started, you had to keep your wits about you for sure.
Once across we had to walk into town in Barra, which was no less bemusing, to meet our driver who went across the night before to save complications, although there were already complications as our taxi had been late resulting in us missing the first ferry and then having to wait three hours for the next one; added to which our need to cross on the ferry at all had gone up in smoke when we found the birds we had hoped to see on the north bank, Egyptian Plovers, were no longer there!

Undaunted we changed plans and set off, luckilywe  found one of the last three species along the way, Temminck's Courser. An overnight stop at Georgetown and the next morning we were very happy indeed to see the main reason for our excursion, Egyptian Plover at Basse.

Try as we might we could not find a Bronze-winged Courser but we were very happy with the five out of six result that we achieved.

The remaining time was spent birding in the local area around the coast resorts and fending off anyone who was intent on parting us from what was left of our money. One of the better places for waders was of course the sewage ponds, where we saw Black-winged Stilt, Wood Sandpiper, African Jacana and Little Ringed plover.

It was also the place where I was dive bombed by a Spur-winged Lapwing! 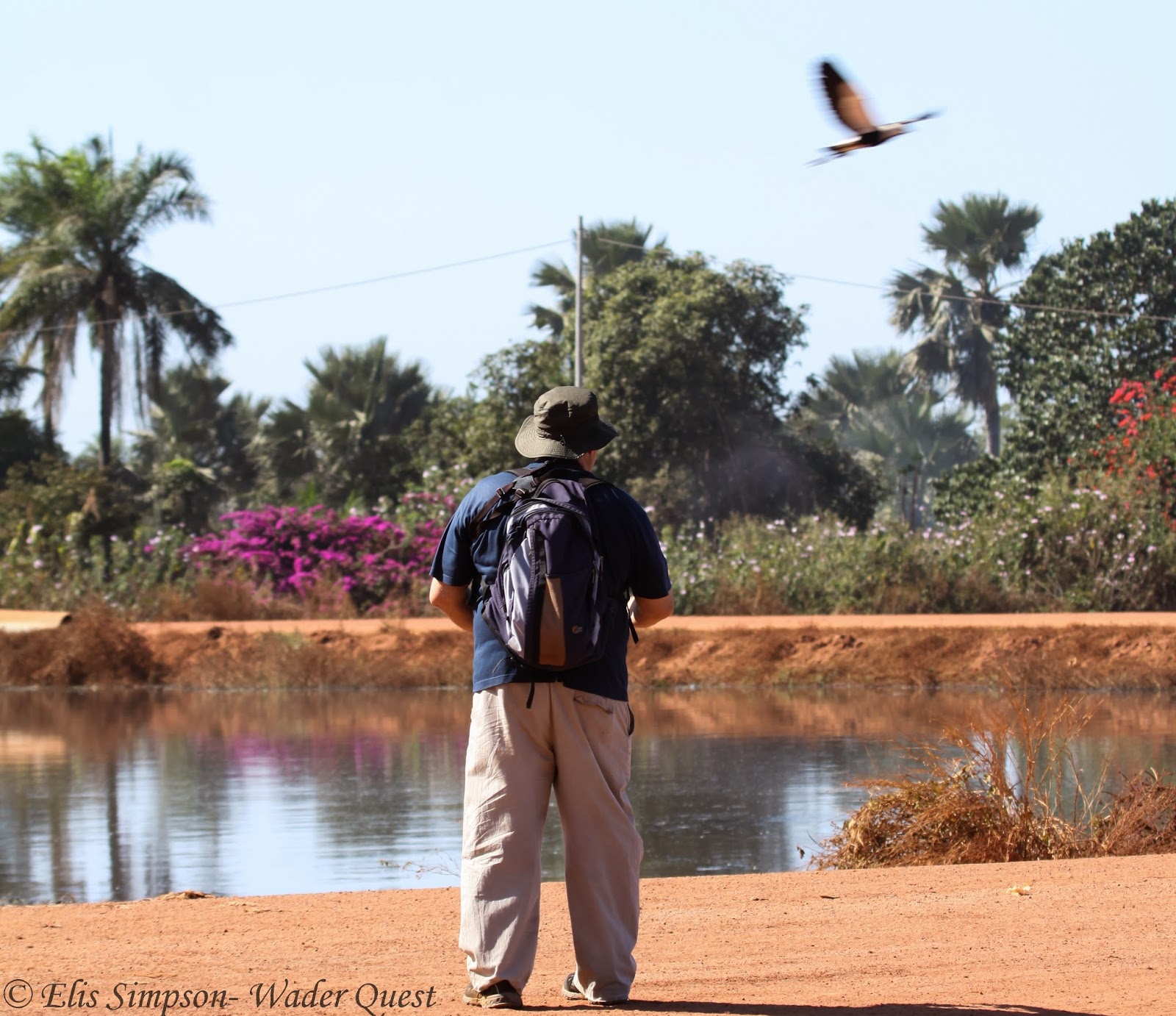 In the end it was a great trip, fun, in an exhausting sort of way, and we were very grateful for everything that Modou had done for us, both birding wise and otherwise. Modou has a website The Gambia and Senegal bird watching where he can be contacted if you are looking for a reliable, honest and very friendly guide for a future trip to the The Gambia.

Posted by Rick Simpson Birding at 02:23