Elis and I had the pleasure of attending the NMBWF at Martin Mere WWT this weekend. It was a fun weekend and we did really well as far as donations etc. were concerned. 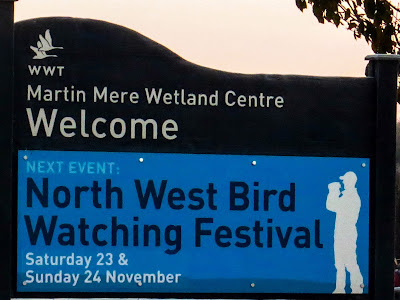 We had arranged to have a stand there, or more exactly a table, a very large table, some months ago via Ellie at Slimbridge who helped us make the initial contact. 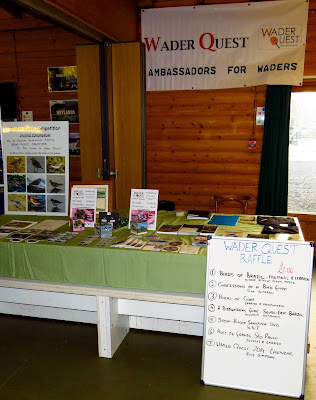 We were very pleased to be going but news that David Lindo would be unable to attend the event after all was a double edged sword for us. On the one hand we were very sorry that we would not be seeing our old friend, but his absence meant that there was a gap in the programme, and we volunteered to step in to fill the vacant slot. Fortunately for us, Hannah Clifford, the organiser of the event who is to be roundly congratulated on a smooth and enjoyable operation, was pleased to accept our offer and so it was that we delivered a talk on about Wader Quest on both Saturday and Sunday afternoon, both of which were reasonbly attended with a minimum number of people either falling asleep or walking out! 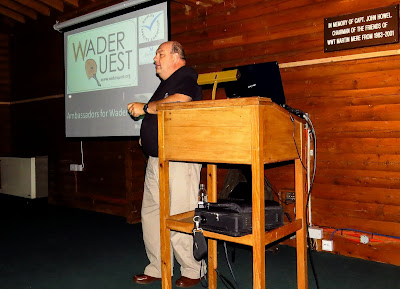 We got up early on Saturday and set off from home at 05:30 hrs. We arrived in plenty of time to set up our stall. We had the usual stuff, collection boxes for donations of course, WWT Spoonie pins and our own 'Wader Quest Collectables' pins of Diademed Sandpiper-Plover and Ruddy Turnstone, which went down a storm; we sold out of the turnstones and returned with just two sandpiper-plovers.

We recycled the Calidris Conundrum competition that we held at the British Birdwatching Fair and once again treated it like a fun raffle making sure that all entries were correct, giving hints and tips on Calidris identification if and when required, the prize for this was a watercolour painting that I had done of a Spoon-billed Sandpiper at Pak Thale.


We also had a normal raffle with books making up the majority of the prizes and together with the donations in the end we raised £50.05 for the Spoonies and £74.00 for the Hoodies, a very respectable tally, so, a big thank you to all who stopped by the stand and supported us. Hannah Clifford, the aforementioned organiser of the event very kindly agreed to draw the winners for both the competition and the raffle.

We had great fun seeing some old friends like Alan McBride who had been very helpful in providing information  for the Australia section of our travels, Charlotte of Forest Optics who we were neighbours with one year at the BBF, Alan Davies and Ruth Miller of The Biggest Twitch fame who were showing people birds in one of the hides, Duncan MacDonald of Wildsounds and new friends Julian Bhalerao who was working with Duncan and Dominic Couzens the prolific author who probably needs little introduction to the many of you who own one of his splendid books.
All in all a thoroughly enjoyable weekend, we met some lovely people and had some very useful exchanges of ideas with some of them, the way ahead for Wader Quest is becoming clearer by the day. I do hope we'll be able to attend many more such events in the future.

Posted by Rick Simpson Birding at 16:04