Dotterels are among the most attractive of Charadrius plovers. They are hard to catch up with and live in some of the remotest places on the planet along with many other waders. For these reasons Dotterel hold a special place in most birders' hearts.

They breed in uplands and arctic tundra where the vegetation is sparse and short, in the UK they breed at the top of Cairngorm in the Scottish Highlands in their westernmost outpost. They breed across Scandinavia and Russia as far as the Chukotskiy Peninsula where they may well breed alongside Spoon-billed Sandpipers. 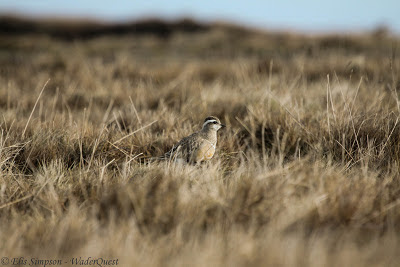 On migration in the UK they can often be seen at the same place each year, Pendle Hill is one such place. I must admit we were hoping for a trip to appear closer to home and in lowland ploughed fields, but it wasn't to be, but seeing these beauties was well worth all the effort. 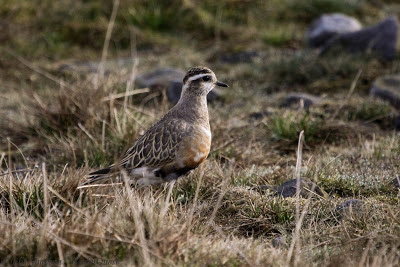 Following on from a vain dash to Lincolnshire a few weeks ago we had been getting regular updates about the Dotterels passing through Pendle Hill in Lancashire from Gary Waddington one of our facebook friends. Gary had been letting us know when there were birds about, but we had difficulty getting up there. Then, on Sunday night, very late I noticed a message from Gary saying he had had the birds very close and had felt that it was one of the best birding experiences he had ever had. That was it, we snapped and at 02:00 without having had time to even get to bed we were off up the M1.


We arrived at first light and staggered up the precipitous slope up the side of Pendle Hill. The views were breathtaking, I assume that is why I was out of breath anyway!

Once on the top we searched for the birds to no avail at first, looking on the very top by the trig point. Not finding them there we searched a little wider, meeting a photographer there who we joined forces with. Not finding the birds we headed back to the trig point again and upon arriving there found several people watching the birds! Annoyance was outweighed by relief. I didn't want to have climbed that hill for nothing! 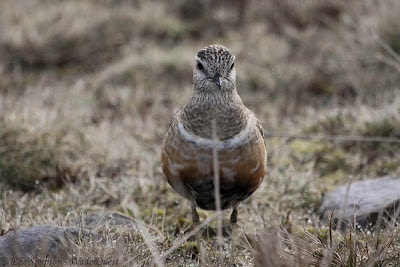 As is typical of Dotterels the birds were very confiding and Elis was over the moon with the way the birds came to her rather than her having to chase them about. I think it is fair to say she is pleased with the results.

One of the birds was brighter in colour than the other two and we thought tht perhaps this was a female. It may have been though that its moult was further advanced as it didn't have a solid cap which a female would typically show, being streaked much as the other two birds were.

Also on the hill were some Golden Plovers, but they weren't nearly so confiding!

To give you some idea of the scale of the hill, the tiny red dot in the middle of this photo (if you can make it out at all) is a bloke running... yes running! Up the hill. 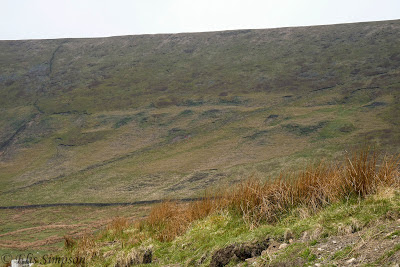 Here's me just about remaining vertical on the ascent. This photo does not adequately portray the steepness of this climb. Elis who took this shot was miles ahead.

A final look back at the hill also giving it some scale with the farmhouse. 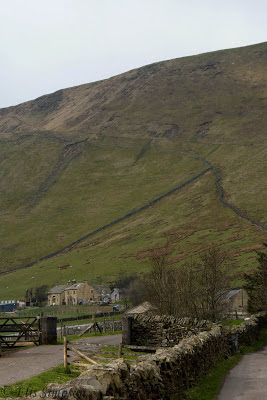 On leaving the hill we bumped into Graham Clarkson of the WWT who informed us that there was a summer plumage Spotted Redshank at Leighton Moss. Despite being in the wrong direction and being rather tired we decided that it was too good an opportunity to miss. Sadly miss we did, arriving shortly after it had flown off from where it had been sitting in front of the Eric Morecambe hide. Oh well, you can't win them all. However there were some waders for us to look at and for Elis to photograph.

Posted by Rick Simpson Birding at 17:31