The next new experience for us was the mist netting which was carried out on marshland and not on the beach.

In the afternoon two crews were dispatched to erect the nets across a section of the marsh. Elis and I followed one group in this task. On the way out to the marsh a temporary handrail had to be erected for people to cross a ditch where the plank was submerged.

Walking on the marsh, even in broad daylight can be very hazardous, there are deep gullies that are concealed by standing water,which can be dangerous for the unwary, much care must be taken to watch your feet at all times. If it is that hazardous during the day, imagine then what it must be like to work out there after dark up to your nether regions in chilly North Atlantic water, the mind boggles. As a safety precaution to avoid having unnecessary bods wandering about out there at night (and in my case because I was scared), Elis and I stayed behind in the barn when we returned later for the catch.

Once out at the proposed netting site, the work of putting them up in the wind started.


Once the nets were firmly in their place the group inspected an old whale skull that had been washed up years ago.
The nets all prepared, as the sun set we left the marsh, some though not for the last time that day. 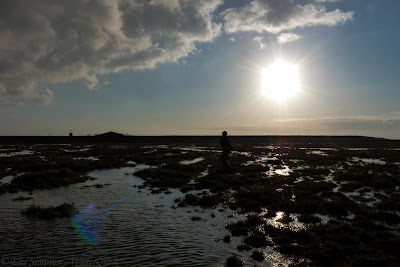 Later on after supper when it was dark we returned to the marsh to see what birds we could collect. It was not a huge haul by local standards but the result was 28 Dunlin, 4 Common Redshank and a single Red Knot. As the catch was so small it was decided to transport them back to base for ringing and processing.

The work went on well into the night...


but eventually the birds were returned to the marsh for release and we all hit the sack exhausted.
Posted by Rick Simpson Birding at 10:03