History: The history of this species is well documented and has been made famous beyond scientific and birding circles in the book Last of the Curlews by Fred Bosworth. It was an abundant migrant prior to 1850 breeding in the central Canadian Artic tundra and wintering in the southern cone of South America. It migrated in huge flocks through North America where it encountered humans and was hunted in huge numbers. Some reports claim that so many birds were killed that piles of many hundred were left to rot while fresher victims were sought. However it is also thought that hunting alone was not responsible and that some natural factor may have been at work which was exacerbated by the relentless killing. The population didn't recover after the hunting stopped leading scientists to suspect habitat loss in both North and South America may have played its part.

There have been records only sporadically up to the late 1980s with the last confirmed report being in 1963; it may still hang on somewhere although it seems unlikely as it always migrated through areas that are well watched these days. There was a report of a nest in 1992 but that is now thought to have been Hudsonian Whimbrel N. hudsonicus. It has not been confirmed on the wintering rounds since 1939.

Extinction: Officially considered Critically endangered on the IUCN red data list as not all potential habitat has been surveyed although if a population does persist it will be very small indeed.

Quite clearly the mass slaughter of these birds was a major factor in their steep decline, however, when their hunting was outlawed in 1916 there was no recovery of the population. At that time the prairies were altered so drastically that it is thought that this prevented any recovery and added to the situation faced today where the bird is almost certainly extinct. In 1962 photographs were taken of a single bird on Galveston Island in Texas and the last known and confirmed wild bird was collected in Barbados in 1963.  Since then only unconfirmed reports have been made up to around 2006.

Wikipedia 16/02/2013: http://en.wikipedia.org/wiki/File:Live_Eskimo_Curlew.jpg The last photograph is available at this link.

Last of the Curlews Fred Bodsworth. 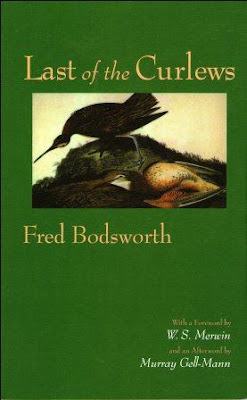 Posted by Rick Simpson Birding at 04:07