According to our list there are nine species of wader that are extinct or though to be so. These are: Canary Island Oystercatcher Haematopus meadewaldoi; Javan Lapwing Vanellus macropterus; North Island Snipe Coenocorypha barrierensis; South Island Snipe Coenocorypha  iredalei; Eskimo Curlew Numenius broealis; Slender-billed Curlew Numenius tenuirirostris; Kiritimati Sandpiper Aechmorhynchus cancellatus; Tahiti Sandpiper Prosobonia leucoptera; Moorea Sandpiper Prosobonia ellisi. Clearly we have no hope of ever seeing them in the wild or even in captivity alive so we decided to try and see some of them them in museums at least, starting at Tring.

We will be doing a blog about each of the extinct species we saw and photographed in due course.


In addition to the above the collection has Jerdon's Courser in the extinct and endangered section; as there was a report of them in 2009 we have not included them in our list of extinct species  leaving them on Critically Endangered category.


Also included in the E+E collection are two species we do hope to see Black Stilt and Shore Plover indeed we should have seen them already! 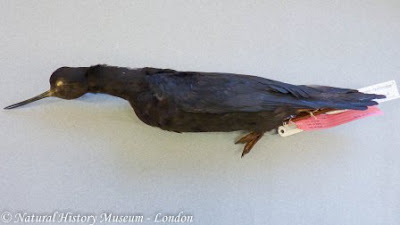 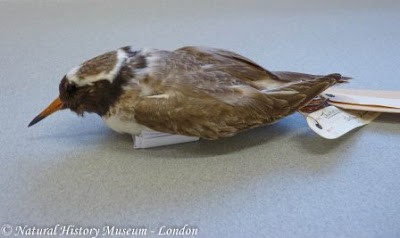 I think you'll agree these look so much better alive, if only we could see all these species in this way still.

The Kiritimati , Tahiti and Moorea Sandpipers have been variously considered one two or three species and even lumped with the Tuamotu Sandpiper into one super species. We have counted them as four species for Wader Quest but we are unlikely to see any of them in this first phase of Wader Quest. Here are specimens from the museum, they are all Tuamotu Sandpiper, there were no specimens of the the other three forms. There is a bit of variation in the underparts of these three birds but the sample size is too small to decide if this is an island population or individual variation.


We also had a look at the Spoon-billed Sandpipers in the collection with a view to checking out their bill shapes. We had noticed in one of our photographs that the bill shape was slightly different in two birds, or at least appeared so. The bird in the left hand picture has flanges on the bill that appear slightly more pointed and angled forward, the bird on the right shows much more rounded flanges; we decided to check this out.


We looked at males and females but could see no consistent differences that would be useful to sex the birds in this way indeed we saw little variation across the board and what variation there was seemed to be individual and random.

Then there was the chick, who's bill has to be seen to be believed it is so cute.

This individual's bill is slightly asymmetrical its right flange being slightly broader and more pointed than the left which appears more rounded.


Thanks to Mark Adams at Tring for his help and co-operation with showing us these precious skins.
Posted by Rick Simpson Birding at 06:48