Dawn from our hotel room window; Wader Questing is a tough assignment, but someone has to do it! 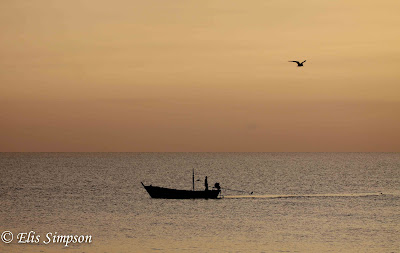 Early morning saw us paying our respects to the spoonies for the last time. In fact we only saw one, but that in itself is a blessing. Here is the last shot Elis took as we walked away with heavy hearts, it was like leaving a long lost friend once again having only just found him or her.

We then went to see the Grey-headed Lapwings to say fond farewells to them too...

... and then pootled back to the King's Project to check out the snipe there. There were something like ten snipe present appearing and disappearing, one of them looked like it was a Pin-tailed but we were only able to confirm Common on this occasion as the bird in question didn't fly but skulked off into the reeds. Compare these two photos. The first is of a Common Snipe for sure, note the shape of the super cilium in front of the eye and also the white colouration of the cheek patch in contrast to the super cilium.

Now examine this shot, the supercilium is broader in front of the eye and the cheek patch is of the same colour. I have noticed that these features are variable though so I would have liked to see this bird fly to identify it for sure, but it could be a Pin-tailed Snipe based on the above.

A quick breakfast, paid the bar bill (very small of course) and set off for Bangkok, but not before stopping off to see if my hunch about driving the track alongside the marsh where the Greater Painted Snipe reside would pay dividends. It did! We got some shots of a male bird typically well hidden.

No new waders today, but some pleasing photographs to add to the collection.


Posted by Rick Simpson Birding at 05:14